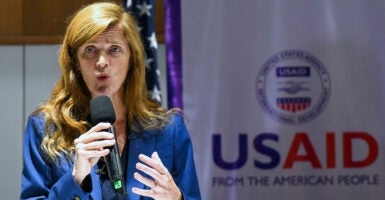 The leftist ideologues at the Biden administration’s foreign aid agency have just drafted a new policy on gender.

The U.S. Agency for International Development is supposed to use U.S. foreign assistance funds to “advance a free, peaceful, and prosperous world.” Its stated goals—saving lives, reducing poverty, and helping people progress beyond the need for assistance—are noble and uncontroversial. Packaging our foreign aid in the language and ideology of radical gender theory, however, is not.

This new gender policy at USAID is the latest manifestation of President Joe Biden’s plan to make gender ideology a central theme of government policy—and there’s a lot of money to set aside to do it. USAID’s budget request for fiscal year  2023 is $60.4 billion. That’s up 6% over last year, and includes an extra $2.6 billion to push the National Strategy on Gender Equity and Equality.

Gender ideology offends many of our needy foreign aid recipients. Putting such ideological shackles on our aid undermines the goodwill that our assistance would otherwise garner. It perpetuates the notion that Americans see other cultures as morally inferior, and that we use our aid to “improve” their cultures.

This is naked ideological colonialism.

A “gender equality and women’s empowerment” policy should seek to empower women and girls, to help them have more chances to exercise their rights on par with men and boys. But the new USAID gender policy instead emphasizes the idea of “gender equity.”

USAID defines gender equity as “the process of ensuring women and men, boys and girls, and gender diverse individuals receive consistent, systematic, fair, and just treatment and distribution of benefits and resources.”

It even goes on to call for measures “to compensate for historic and systemic disadvantages.” That’s a far cry from equality. And it’s neither a proper nor achievable goal for the U.S. government. No amount of foreign assistance will yield equal outcomes for any groups or individuals in other countries.

Instead, USAID ought to return to the definition of “gender equality” that it employed in its previous policy: “The state in which women, girls, men, and boys have equal access to opportunities, resources, benefits, and legal protections, and which recognizes their equal, inherent human dignity, worth and unalienable rights.”

In the new draft policy, USAID departs from a perennial, science-based understanding of sex and from the common usage of “gender” as synonymous with biological sex. Instead, the terms in its glossary are controversial and nebulous.

It acknowledges as much by stating that “language is dynamic and evolving.” The document is replete with terms such as “gender binary,” “gender diverse,” and “gender identity,” which refer to nothing more than subjective feelings or artificial labels.

Not only is this language insensitive to other cultures, barely disguising an ideological agenda, but it’s also nonsensical. There’s no neutral, empirical way to discern a “gender identity.” As a concept, “gender identity” is an artifact of gender theory, not history or science. It should not be governing our foreign policy or aid programming.

USAID’s consistent use of the phrase “women and girls in all their diversity” stretches the definition of “women and girls” to the point of including anyone, even men and boys.

By defining that term to include “the full range of gender identity and/or gender expression, sex characteristics, sexual orientation, and other intersectional characteristics,” it detracts from focusing on needs or conditions unique to women. For example, a man who claims to “identify” as a woman does not have the same needs or challenges as a woman—a biological female—in the context, for example, of menstrual health and hygiene.

A USAID grant or program ought to recognize and address that reality.

Not only does the new policy add radical and counterproductive elements, but it took important content out. Motherhood is a glaring omission in a document that purports to be concerned with women and girls. Millions of women who benefit from USAID programs are mothers, and happily so.

Motherhood is a defining part of these women’s lives. U.S. policy should acknowledge and support the critical role that mothers make to a productive and peaceful society.

USAID’s emphasis on “gender-transformative education” is another example of overt ideological imperialism. According to the document, the aim of gender-transformative education is to “transform stereotypes, attitudes, norms, and practices.” It does so “by challenging power relations, rethinking gender norms and binaries, and raising critical consciousness about the root causes of inequality and systems of oppression.”

USAID holds this type of education up as worthy of support. But changing cultural attitudes and raising awareness of oppression is not what parents want for their children. They want better reading, math, and science.

Under Biden, the U.S. is exporting a tendentious ideological fixation of a disproportionately powerful special interest into the developing world.

This is especially tone-deaf in U.S. government dealings with countries that do not share the Biden administration’s left-wing worldview. Remember this the next time the liberal news media complain about the U.S. “standing” in the world.