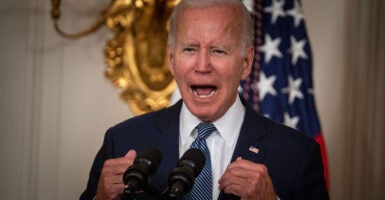 A key reason that Joe Biden occupies the White House is that too many voters considered him a nice guy.

“It would be fun to have a beer with Grandpa Lunchbucket!” Or so the thinking went. Whatever his ideas, Biden would be so much warmer than Mean Mr. Marmalade, Donald J. Trump.

So, how is that working out?

Rather than nice, Biden is angry, nasty, vindictive, and increasingly totalitarian.

Much like East Germany’s final dictator, Biden brooks no dissent. He vilifies over 74 million Americans who voted for Trump as “ultra-MAGA Republicans,” “extremists,” and “semi-fascists.”

•The unprecedented raid on Trump’s Mar-a-Lago estate in Florida, in a dispute over classified or (per Trump) declassified documents, should have been settled in court, at worst, not at gunpoint. These “classified” materials included Trump’s privileged legal documents, tax papers, medical records, passports, other nongermane materials, as well as former first lady Melania Trump’s garments and even items in teenage son Barron’s bedroom.

•The Honecker-Harris regime’s radical War on Attorney-Client Privilege has capsized that ancient legal norm. The FBI has invaded the offices of, and snatched phones from, Trump’s legal advisers. These include John Eastman, Boris Epshteyn, Rudolph W. Giuliani, and Victoria Toensing.

•These Americans were among the 35 to 40 Trump supporters who have endured FBI raids, federal subpoenas, or both. My Fox News colleague Tucker Carlson quoted relevant subpoenas. They’re probing Americans who made “Any claim that the Vice President and/or the President of the Senate had the authority to reject or choose not to count presidential electors.”

There is nothing illegal about claiming that the vice president wields certain powers.

“Vice President Kamala Harris sets gasoline prices. If you’re paying too much, tell her to chop them.”

Is this claim nonsense? Yes.

Is it illegal? Hell, no!

Likewise, Americans are free to make the still-debatable argument that the vice president influences which Electoral College votes can or cannot be accepted when a joint session of Congress certifies each presidential election.

Such “election denial” is the Democrat Party’s favorite indoor activity.

On the House floor, Democrats loudly raised doubts about the fairness of the 1968, 2000, 2004, and 2016 elections. They argued that certain states’ electoral votes should be replaced with others.

Right or wrong, under the U.S. Constitution and the Electoral Count Act of 1887, Democrats had every right to inquire whether Richard Nixon, George W. Bush, and Trump won the White House, fair and square. Democrats were in the clear even when they outlandishly claimed that Trump stole Alabama and Wyoming, despite winning 62% and 68% of the vote in those states.

Republicans, in and out of Congress, also had and have every legal right to object to the 2020 election for all the reasons and in all the ways that Democrats did in previous years.

When Democrats claim that Republicans cheated, they win applause for their political courage.

When Republicans claim that Democrats cheated, they get stopped by the FBI, confronted in public, deprived of their cellphones, subjected to house raids, arrested in front of their families and friends, and tossed in jail.

For Democrats and Republicans, this is called free speech. It remains shielded by the First Amendment. If Biden and his secret policemen, Attorney General Merrick Garland and FBI Director Christopher Wray, do not understand all of this, then they lack the elementary capacity to do their jobs. In that case, they should resign immediately.

East Germany went kaput in 1990. Resurrecting it here would be dummkopf.