How Can Small Businesses Prosper? Job Creators Network Has a Plan 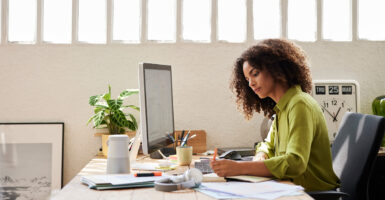 The Job Creators Network unveiled its eight-point American Small Business Prosperity Plan at the Capitol Hill Club in Washington on Wednesday. The plan will serve as a guide for the next Congress to implement policies that help U.S. businesses like this one grow. They include making the Tax Cuts and Jobs Act permanent, expanding access to capital, and limiting government spending. (Photo: Morsa Images/DigitalVision/ Getty Images)

Small-business owners and congressmen have unveiled an eight-point plan to guide lawmakers in creating conditions for small American businesses to prosper.

Among the priorities in the plan, spearheaded by the Job Creators Network, are to make the Trump administration’s 2017 Tax Cuts and Jobs Act permanent, to expand small businesses’ access to capital, and to reduce inflation by reining in government spending.

“Small businesses across the country are suffering as they endure 40-year high inflation, the lingering consequences of the pandemic lockdowns, labor shortages, and a policy agenda that consistently puts entrepreneurs last,” Job Creators Network President Alfredo Ortiz said ahead of the Wednesday event, held at the Capitol Hill Club in Washington.

“Getting the next Congress to focus on those steps in tax policy and regulatory policy and welfare reform that enable us to, once again, launch a generation of prosperity is … central to the future of the country,” said former House Speaker Newt Gingrich, R-Ga., who joined the event virtually, adding:

And I think that the Job Creators Network, by championing a small-business prosperity plan and getting a wide range of organizations and people to jointly come together, is going to play a major role in being able to once again launch small business into greater prosperity.

“I’ll do all I can to help further the concept of a small-business prosperity plan,” Gingrich added, saying he would urge the next Congress to help “make it easy to become an entrepreneur, easy to start a business, easy to hire more people, and have a chance for all of us to have prosperity through a rising tide of small businesses across the entire country.”

Ortiz told The Daily Signal that the Tax Cuts and Jobs Act, which is set to expire in 2025 if not extended, is a vital component of the plan. “If that goes away, it’s going to be a major issue, especially for small businesses.”

Blackwell quoted civil rights leader Jesse Jackson, with whom he worked in the 1960s, who said, “Capitalism without capital is just another -ism.” Blackwell affirmed that access to capital is a huge part of fueling economic growth and job creation.

Corina Morga, a member of a Native American tribe in North Carolina, said she faces new economic challenges as president of CR Construction Services, a small business based in Baltimore.

“COVID wiped me out,” she said. “Seventy percent of my business was gone.” Now, roaring inflation and limited access to capital is placing more strain on business owners like herself, she explained.

According to an August poll by John McLaughlin and Scott Rasmussen, more than half (54%) of the 500 small-business owners surveyed said they are concerned current economic conditions could force them to close their businesses. Fifty-seven percent of respondents also said they think the U.S. is in a recession, the Biden administration’s claims to the contrary notwithstanding.

Eighty-two percent said they already have raised prices or expect to, due to inflation, government policies, and other economic factors.

Nicole Wolter, owner of HM Manufacturing in Wauconda, Illinois, shared that supply chain disruptions have been “astronomically horrible” for her business, which produces power-transmission components. “We couldn’t get materials. And when we could get materials, they were sky-high with inflation being the way that it is,” Wolter said.

Some of her employees have had to quit simply because they couldn’t drive to work due to unaffordable gas prices, she noted.

The Trump administration’s Tax Cuts and Jobs Act “unleashed a tsunami of expansion into my company,” said Wolter. “We were able to purchase $750,000 worth of new capital equipment. I was able to give raises and bonuses.”