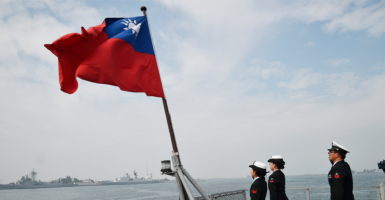 Former Undersecretary of State Keith Krach says recognizing Taiwan would strip China of any legitimacy to its claims over the island. Pictured: Taiwanese sailors salute the island's flag on the deck of a supply ship after taking part in annual drills at a naval base in Kaohsiung, Taiwan, on Jan. 31, 2018. (Photo: Mandy Cheng/ AFP/Getty Images)

Formally recognizing Taiwan would provide it with legitimacy and undermine the Chinese Communist Party’s assertion that the island nation across the Taiwan Strait was always part of China, says Keith Krach, a former undersecretary of state for economic growth, energy, and the environment.

“[Russian President Vladimir] Putin’s road map toward war is instructive. Russia is rewriting history to claim ‘legitimacy’ by declaring that Ukraine was part of Mother Russia,” Krach told The Daily Signal in an email. “Likewise, the [Chinese Communist Party] has been arm-twisting governments and organizations into supporting its assertion that Taiwan has always been part of China under the ‘One Country, Two Systems’ rubric.”

“The truth is, Beijing destroyed that dubious idea when it absorbed Hong Kong in 2020,” said Krach, adding:

America’s policy insists that the question of Taiwan be resolved through dialogue—without coercion or use of force. Since Beijing has demonstrated that it’s not willing to uphold its side of the bargain, the bargain no longer exists.

Krach said a big reason for formally recognizing Taiwan, which he described as an “independent democracy,” is to take away China’s “claim to legitimacy” over the island. He cited Putin’s assertion about aid to Ukraine as an example for why the policy change is needed.

“Putin has now declared that any military intervention to help Ukraine is a direct attack on Russia that justifies nuclear retaliation. Literally,” he said.

Miles Yu, director of the China Center at the Hudson Institute and former Secretary of State Mike Pompeo’s top adviser on China, listed three lessons Chinese President Xi Jinping should be aware of, based on the Russia-Ukraine war in a conversation with journalist Simone Gao.

“Well, personally, I don’t think Xi Jinping is even teachable of any lessons, but if I were Xi Jinping, I would be aware of the following: No. 1, bullying a small country will never work, as the small will gain more inner strength and external support, becoming much stronger and more lethal in the end,” Yu said, adding:

The third lesson, he said, is that “there are great limits in modern warfare because there are many variables.”

“China may look strong, but it has great weaknesses and vulnerabilities, too. So, a war of aggression against Taiwan may not be that easy to win,” he said.

China has ramped up its hostility toward Taiwan over the past several months, notably since House Speaker Nancy Pelosi’s visit to the island in August. One day after the speaker left Taiwan, the Chinese military launched missiles that hit seas south, north, and east of Taiwan, with five landing in the waters of Japan’s exclusive economic zone, according to The New York Times.

The Senate Foreign Relations Committee is working to ensure Taiwan can counter China’s aggression, having approved the Taiwan Policy Act of 2022 on Sept. 14 in a 17-5 vote, CNN reported.

The bill, which was spearheaded by Sens. Bob Menendez, D-N.J., and Lindsey Graham, R-S.C., would provide Taiwan with $4.5 billion in security system over four years, Reuters reported.

Nearly 70% of voters agree with Krach’s stance that the U.S. should formally recognize Taiwan as an independent country, according to a Rasmussen poll in August, Newsmax reported.

However, Sen. Chris Murphy, D-Conn., spoke out against the U.S. changing its current policy of strategic ambiguity and formally recognizing the island in an Aug. 31 tweet thread.

“Negotiated and passed at the time the United States was moving to officially recognize the government of the [People’s Republic of China], it requires that the United States provide Taiwan with the means to defend itself,” Cheng said, adding:

It also mandates that the U.S. maintain its own armed forces at sufficient level to help maintain peace and security in the East Asia region.

The U.S. also follows the “six assurances,” created in 1982, which ensure that “the U.S. would not ‘set a date for termination of arms sales to Taiwan,’ change any terms of the act, consult with China before selling arms to Taiwan, intervene between Taiwan and China or ‘alter its position about the sovereignty of Taiwan,’ nor ‘pressure Taiwan to enter into negotiations with China’ and formally recognize China’s control over Taiwan,” The Daily Signal reported.

“There is an omnipresent possibility of conflict between China and Taiwan. This is due, in no small part, to Beijing’s insistence that it has the right to use force to effect reunification, if necessary,” Cheng said.

“As the [People’s Republic of China] increases its military capabilities and does little to reduce tensions … that possibility grows,” he said.