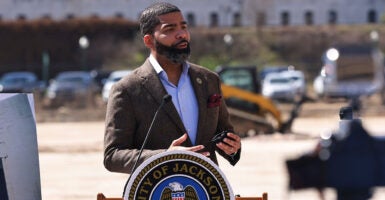 Jackson Mayor Chokwe Antar Lumumba speaks during a press conference March 8, 2021, in Jackson, Mississippi. Residents in parts of Jackson had been without running water since mid-February, but water was recently restored, in part due to Republican Gov. Tate Reeves' actions. (Photo: Michael M. Santiago/Getty Images)

Douglas Carswell is the president and CEO of the Mississippi Center for Public Policy. He was previously a member of the British Parliament and he now lives and works in Jackson.

Here in Jackson, Mississippi, the big news is that we have running water again. After pumps at the main water treatment plant in the city failed a few weeks ago, many in this city of 150,000 had to try to cope without.

Even better news, for the first time in months, the city is not on a “boil water notice,” meaning that we are supposed to be able to drink that water—not that I would be tempted to consume the sepia-tinged sludge that comes out of the taps. But at least something now flows.

With the immediate crisis over, it is worth asking how it was possible for a state capital in America in 2022 to end up unable to provide its residents with even the basics. How did it happen?

Jackson city leadership would like you to think it has something to do with all the recent rains we have had here in Mississippi.

Speaking somewhat cryptically at a recent press briefing, Jackson’s mayor, Chokwe Antar Lumumba, said the water treatment facility had been “challenged, as it relates to these flood levels.” Putting the blame on the rain, he went on to say that the city’s water administration was trying to “figure out how they contend with that additional water that is coming in.”

Officials in neighboring towns and cities, such as Madison, Flowood, and Clinton, managed to figure out how to supply residents with clean water despite having just as much rain.

Unless the laws of physics are different in Jackson, the only logical conclusion one can draw from this fiasco is that Jackson’s water problems are a consequence of systemic mismanagement.

Two thousand years ago, the Romans figured out how to supply a city with running water by putting it in pipes. Jackson today seems to be struggling to master this technology.

Key water treatment plants in the city did not employ qualified personnel to run them. Now they have stopped running. What did city authorities think would happen?

For years, city authorities have underinvested in Jackson’s water infrastructure, to the point where it is now falling apart. This, some will be quick to tell you, is because of a lack of money. But why is there not enough money?

In 2017, Jackson’s water billing system collected $61 million in revenue, and the operating costs of the city’s water system were about $54 million. That left a healthy surplus that competent management might have allocated to meet maintenance costs.

This year, the amount of revenue collected is likely to be closer to $40 million, far below running costs. Not only is there no surplus to go toward maintenance, there does not seem to have been much maintenance even when there was a surplus.

How on earth does a city water authority manage to lose almost a third of its revenue in the space of five years? In large part because the city authorities have not collected revenue since they have lacked an effective water billing system.

I’m tempted to say that it feels like Homer Simpson was running the billing system, but the thing about Homer is that by the end of every episode, Homer comes good. I’m not sure that the same can yet be said for our city.

Several years ago, the city contracted with Siemens to create a new billing system, and to upgrade much of the city’s dilapidated water infrastructure at the same time. That arrangement ended with the city suing Siemens for $89 million.

Given what happened with Siemens, I worry that Jackson might not be able to find a contractor willing to undertake the herculean task of fixing the city’s water supply, even if the money could be found. I also suspect that any large outside contractor prepared to undertake the task may want to ensure that they were free to subcontract with their preferred partners on the basis of value, and not to be subjected to various “contract rules” on the basis of politics.

The restoration of the city’s water supply came about almost entirely thanks to the state governor, Tate Reeves. He took on the task of providing emergency water distribution to local residents and offering state money to pay for half of it.

Of course, the media hasn’t given him a shred of credit for any of it.

Such is the level of dysfunction in Jackson’s city administration that not even the federal government (controlled by Democrats) is yet willing to step in with aid to help Jackson’s mayor (a Democrat) unless and until, as Rep. Bennie Thompson, D-Miss., put it, “the city to comes up with a plan.”

None of that stopped the media writing the water crisis story up as a tale of wicked neglect from state Republican officials determined to do down a Democrat-run city.

Instead of starting from the position that Jackson, like every other municipality in America, ought to be able to provide its citizens with clean water, many in the media wrote up the crisis as being about race. The Washington Post led the way with a ludicrous article saying that “racial politics” was to blame. Others then piled on.

As I am a relatively new arrival in Mississippi, what shocked me most about Jackson’s water crisis was not that it happened, but what I believe was the sheer dishonesty in much of the media reporting about what happened and why.