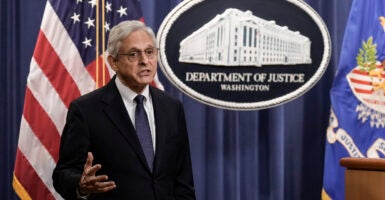 The Justice Department has hit Eagle Forum of Alabama with a voluminous subpoena that violates the organization’s First Amendment rights to speak freely, engage in the political process, and talk to its elected representatives.

It’s an intimidation tactic, pure and simple, and shows just how partisan the Justice Department has become. This out-of-control behavior should scare every citizen and volunteer organization, no matter where they stand on the political or social spectrum.

Eagle Forum of Alabama is a small nonprofit. It has one full-time employee and one part-time employee. Virtually all of its work on issues of interest to its members is done by volunteers. It is the quintessential, uniquely American grassroots membership organization that French historian Alexis de Tocqueville lauded in “Democracy in America.”

As Eagle Forum’s motion to quash the government subpoena says, one issue that its members have been concerned over is “gender-altering medical treatment to minors” and the “permanent and adverse effects of such medical procedures on those minors.” Those serious, lifelong effects deeply concern many physicians and parents.

Members of Eagle Forum made their worries known by doing things every American has an absolute right to do: They spoke out, made speeches, organized meetings, talked to other residents and organizations in Alabama, and contacted their elected state representatives.

In other words, they exercised their constitutional rights to engage in “freedom of speech,” to “peaceably assemble,” and “to petition the government for a redress of grievances.” They also exercised their right to associate, recognized by the Supreme Court as implicit under the 14th Amendment.

None of these activities should trigger stalking by Justice Department lawyers. So how has this come about?

Earlier this year, the Alabama Legislature passed the Alabama Vulnerable Child Compassion and Protection Act, which became effective May 8. It bans puberty blockers, hormone therapy, and surgery to alter the biological sex of a minor.

A huge number of left-wing advocacy organizations immediately sued the state, and the Justice Department intervened in the lawsuit, echoing their claims that the new Alabama law violates the equal protection clause of the 14th Amendment.

Eagle Forum is not a party to the lawsuit. Yet the Justice Department has served what is referred to as a third-party subpoena on the organization. This subpoena outrageously demands that Eagle Forum and its members turn over all:

In other words, the Justice Department wants to turn Eagle Forum of Alabama inside out, forcing it to turn over its records on everything it does. This would let government lawyers paw through and scrutinize everything, including privileged communications and even personal discussions and communications with other private citizens and nonprofit organizations.

And there isn’t a single, justifiable reason for the Justice Department to do this. Eagle Forum isn’t a party in the lawsuit. It is not a government agency. It is not the Alabama Legislature. It has no power to vote to enact this (or any) legislation or sign it into law.

Keep in mind that the lawsuit is making a constitutional claim: The plaintiffs, including the Justice Department, are arguing that the statute as written violates the U.S. Constitution.

The answer is: absolutely nothing. None of the documents or information sought by the Justice Department has any relevance to whether the text of a state law violates the 14th Amendment.

This subpoena, issued by Jason R. Cheek of the U.S. Attorney’s Office in the Northern District of Alabama, has but one intent: to harass and intimidate a conservative organization for daring to engage in the democratic process by working on an issue that inflames the Left.

The right to associate freely with other citizens who share your interests was recognized by the Supreme Court in 1959 in NAACP v. Alabama. Ironically enough, in that case, the Alabama state government was harassing the NAACP with similar demands for information due to its work on civil rights issues and legislation.

In an affidavit filed with the court in the current case, Rebecca Gerritson, executive director of Eagle Forum of Alabama, correctly warns:

If this subpoena is enforced, legitimate, law-abiding organizations like ours will be subject to scrutiny for engaging in constitutionally protected activities.  Further correspondence by EFA [Eagle Forum of Alabama], including emails, notes, presentations, speeches, interviews, etc. could be weaponized by government officials who hold (or are being required to assert) opposite political views. In addition, enforcement of the federal government’s subpoena would set a precedent that would stifle other citizens who want to exercise their constitutional right to make their views known to their elected officials on public policy matters.

This is a dangerous action by the Justice Department. It’s something that all Americans who value their constitutional rights should oppose.

UPDATE Sept. 23:  Jason R. Cheek, the Justice Department lawyer who served this harassing subpoena on Eagle Forum of Alabama, is the appointed “district election officer” for the northern part of Alabama. So Cheek, who is trying to intimidate state residents who are members of Eagle Forum for speaking out and engaging in the democratic process, is the official responsible for “handling any complaints of election fraud or voting rights abuses.”

Given Cheek’s reprehensible conduct in the Eagle Forum case, his continued role as district election officer isn’t likely to generate confidence in the electorate of Alabama that the Justice Department will handle complaints in a nonpartisan, unbiased, and fair manner.

This commentary originally was published by PJ Media.