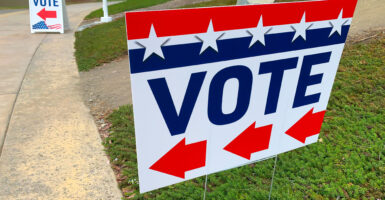 Across the country, left-wing special interests are looking for every opportunity to gut election safeguards, and rogue courts are one of their favorite vehicles. (Photo: Getty Images)

Democrats on the North Carolina Supreme Court are once again showcasing the Left’s unusual brand of “democracy.”

First, the court voted on party lines to seize power to redraw the state’s congressional maps to the advantage of Democrats. Then it concocted a mechanism to declare voter-passed constitutional amendments unconstitutional, putting a voter ID amendment in jeopardy that 55% of North Carolinians favor.

Now that same partisan court is rushing to hear a challenge to the voter ID law that enabled that amendment before the November election—and before voters have a chance to elect new justices that may hand court control to Republicans.

Believe it or not, Supreme Courts acting like Supreme Legislatures is what progressives call “democracy,” and they want to see more of it. Across the country, left-wing special interests are looking for every opportunity to gut election safeguards, and rogue courts are one of their favorite vehicles.

With virtually unlimited budgets fueled by progressive “dark money” and an army of lawyers, activist organizations, and partisans like Marc Elias file an endless stream of lawsuits to reshape elections for partisan gain.

Conservative organizations are fighting back more than ever before, helping states to defend their laws, and courts frequently rebuff these left-wing lawsuits as gross overreaches. But the lawsuits keep coming.

The tactic is not new. Most Americans know that in a democracy, the people elect lawmakers to make the law. But over time, more and more states have elected Republican legislatures. Instead of trying to sway voters, frustrated progressives have turned to litigation and unelected courts to impose their policies.

During the 2020 election, the practice exploded. More than 200 lawsuits were filed by liberal groups before Election Day, challenging everything from voter ID laws to bans on partisan operatives going door to door collecting ballots.

Elias’ strategy was simple: Sue a Democrat on behalf of a progressive advocacy group or even the Democratic Party itself, and then reach quick backroom deals that effectively change the law.

Fortunately, conservative groups, legislatures, and the Republican Party were able to rally and stop many cases, but Elias won key victories that changed  the law in influential swing states. It’s a strategy he is repeating in the midterms.

Abusive litigation to undermine voting laws has not ended with the 2020 election. First, Elias sued—but failed—to overturn the results of two congressional races. Then, as states began passing new election laws that made it easier to vote and harder to cheat, he sued to block them as well. This year. Elias has already filed more than 60 lawsuits to end commonsense election reforms, force states to accept congressional redistricting maps gerrymandered to favor Democrats, and even to block third parties, like the North Carolina Green Party, from the ballot so Democrats don’t have to compete for their votes.

In 2020, Elias’s strategy was akin to a sudden, surprise attack. The Right has done more to organize and engage than ever before, but far more funding is needed for conservatives to reach parity with the Left.

Progressive activists and their allies in the media paint all these efforts as “pro-democracy.” It is more accurate to describe them as “pro-Democrat.” The truth is, the laws that Elias and others are targeting expand voting access—Georgia voters now have more days to vote than Delaware or New York, for example—while also boosting commonsense safeguards that take the slack out of elections.

No wonder voters consistently say they want these policies. Polling shows that 84% of Americans back photo ID laws, for instance, including 72% of black voters and 90% of Hispanics. In spite of handwringing from many on the Left, turnout in many of this year’s primaries exploded in states that passed election reforms, too, making these laws not only popular, but effective.

But partisan Democrats have made overturning these laws key to their anti-democracy agenda. Despite evidence like explosive turnout, they insist that states are passing laws that assault the very right to vote itself. In reality, the Left just wants to rig election rules to its advantage and too many in the media provide it with a pass, conflating its partisan interests with preserving democracy.

Fortunately, the Left’s legal overreaches in North Carolina have given the U.S. Supreme Court a chance to truly defend democracy by reining in these rogue court actions when it hears a case called Moore v. Harper later this year. Unless and until that happens, politically savvy lawyers like Elias will keep getting rich as they file unending lawsuits hoping to skew the outcomes of elections by changing the rules for political gain.

That’s the real threat to democracy if there ever was one.