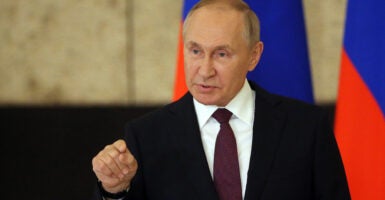 If America can reach its energy potential, the bludgeon that Russia now holds can be removed from Russian President Vladimir Putin’s hand. Pictured: Putin speaks during a press conference Sept. 16 at the Shanghai Cooperation Organization Summit in Samarkand, Uzbekistan. (Photo: Contributor/Getty Images)

Many Americans are asking, after nearly seven months of Russia’s war on Ukraine, why the United States is involved at all. What are the hard interests of the U.S. in this conflict?

The bottom line: Way more is at stake than standing up to a blatantly unlawful aggression or countering regional instability involving key allies. Those reasons alone are more than enough for most decision-makers, but there is more, much more.

Additional factors should cause even semi-isolationists to reconsider their calls to stand down American material support for Ukraine’s defense. In short, our energy security is at stake.

European nations have become increasingly reliant on hostile countries for supplying oil and gas, putting them at risk should those hostile powers decide to use energy as a weapon. This was an ill-advised policy, and they should never have followed that path. But they did.

Now, Europe is facing even higher uncertainty about energy prices after Moscow earlier this month turned off supplies of Russian gas through the Nord Stream 1 pipeline, a source that makes up around 40% of the European Union’s natural gas imports. As a result, the EU recently proposed emergency measures that would require member nations to curb their gas use until next March and curb profits from energy companies via new taxes.

Russia’s threat to stable and regular access to energy is a knife at the throat of Europe and an economic destabilizer of enormous proportions. As the instability of the energy supply grows, especially in Europe, the U.S. can help.

Since the 1970s, policymakers have recognized that maintaining access to a diverse assembly of energy supplies is a vital interest for the U.S. and its allies. Therefore, the U.S. needs to step up and increase its own domestic energy production and provide our allies with stable, reliable energy.

If America is able to reach its energy potential, the bludgeon that Russia now holds can be removed from President Vladimir Putin’s hand.

The U.S. energy production boom in the 2010s allowed us to become much less reliant on foreign actors, and a net energy exporter in 2019.

The growing share of U.S. supplies in the global market transformed the geopolitical power of traditional energy powerhouses such as Russia and Saudi Arabia, creating greater energy and political security for the world. It’s also why calls by some to limit the export of U.S. energy undermine our long-term foreign policy interests.

However, nothing can happen until our adversarial attitude toward fossil fuels changes. Instead, we must urge leadership to adopt an energy policy that increases domestic supplies and also supports development of critical infrastructure.

Following through on permitting reform pledges found in the so-called Inflation Reduction Act, recently passed by Congress, can be the first step to helping our allies abroad. Facilities for exporting liquid natural gas are an important bucket of projects that can be caught up in delayed reviews under our system’s regulatory burdens.

If America continues in the direction that it is headed, U.S. citizens will rely on unstable countries.

Boosting America’s energy production will be a win for strengthening our own energy security and help Europe lessen its dependence on Russian energy supplies.

America should continue to support Ukraine in order to end the conflict with Russia quickly and in Ukraine’s favor. It is the right thing to do.

America also must use unshakable self-interest as a basis. If the U.S. energy sector is unleashed again, it would lower gas prices, provide jobs, and invigorate the economy.

Unleashing American energy also would rescue Europe from the malign threats of Putin and pull the international rug out from under Russia’s already shaky economy.