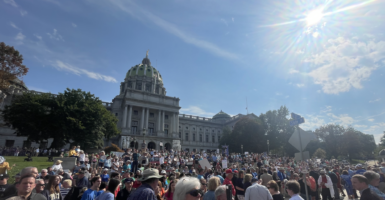 Several thousand Pennsylvanians gathered in Harrisburg on a sunny Monday morning for the second annual Pennsylvania March for Life. (Photo: The Daily Signal)

HARRISBURG, Pa.—The United States Supreme Court may have overturned Roe v. Wade this summer, but pro-life activists across the country know the battle over abortion is far from over.

Marshaled by the March for Life, several thousand Pennsylvanians gathered in Harrisburg on a sunny Monday morning in what PennLive.com calls “one of the largest gatherings of people at the Pennsylvania Capitol in recent years”—the second annual Pennsylvania March for Life.

Currently Pennsylania allows abortions up until 23 weeks, according to the pro-abortion Guttmacher Institute, and the abortionist may only end the life of an unborn baby older than 24 weeks if the mother’s life or health is in danger.

The Daily Signal spoke with many parents who had brought their young children with them to demonstrate against abortion. Smiling cheerfully and carrying brightly colored signs, these families trooped through the streets of the state capitol together, some chatting, some chanting, some praying, and some singing.

“Pennsylvania is pro-life,” members of the crowd and the march’s speakers said repeatedly.

Many activists held signs that promoted adoption—or said that they themselves had been adopted and were grateful their mother chose life. The Daily Signal observed only one pro-abortion protester at Monday’s March for Life.

“Thankfully we have strong pro-life leaders in our Pennsylvania General Assembly, many of them gathered here behind us,” Michael Geer, president and CEO of the Pennsylvania Family Institute, told the crowds in remarks delivered before the march began.

“A majority,” he continued, noting that Republicans control both the state House and Senate. “That’s why the abortion industry is going to the courts, because they know that they can’t get it past these people.”

“These are forward-thinking, pro-active lawmakers,” he added, gesturing to the lawmakers behind him, “and they have already taken first steps, with the Life Amendment, to stop court-ordered taxpayer funding of abortion, and to maintain the opportunity [to] pass laws to protect women and babies from the false promises of the abortion industry.”

Geer referred to Republican-backed legislation, an amendment to the Pennsylvania Constitution that states that abortion is not a right. The state’s GOP lawmakers hope to curb Pennsylvania’s abortion laws through the measure and circumvent the state’s pro-abortion governor.

Those delivering remarks on Monday morning reminded the marchers that though the Supreme Court overturned Roe v. Wade in a massive pro-life victory this summer, there is work yet to be done in order to stop abortions nationwide. Speakers urged the demonstrators to head to the polls and to vote for candidates who would protect the right to life.

Pennsylvania gubernatorial candidate and state Sen. Doug Mastriano, a Republican, also attended the march, where he told The Daily Signal that he is calling on Democratic politicians like Massachusetts Sen. Elizabeth Warren to cease their “awful rhetoric” condemning pro-life crisis pregnancy centers.

Mastriano also critiqued Democratic politicians like John Fetterman, who is running for a Pennsylvania Senate seat and has said he does not believe there should be any limits on abortion, and Josh Shapiro, Mastriano’s Democratic gubernatorial opponent.

“They’re so beholden to this radical vision of America by Margaret Sanger,” Mastriano said. “Sanger wanted to use abortion as eugenics to remove Italians, African Americans, Latinas, anyone who didn’t look like her.”