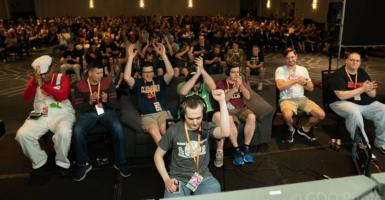 The Left is unable to resist inserting its woke politics into everything. Bipartisan causes often suffer. Pictured: A group of gamers on during a session at Games Done Quick. (Photo: Richard Ngoc Ngo/Courtesy of Games Done Quick)

Sorry cancer patients, the radical Left has decided their feelings are more important than raising money for your health.

Video game-based charity Games Done Quick announced that it was pulling its live event out of Florida over concerns related to COVID-19 restrictions and the Parental Rights in Education Act, a bill leftist hacks have labeled anti-LGBT.

“Given [Florida]’s continued disregard for COVID-19’s dangers (including anti-mandate vaccination policies) and an increased aggression towards LGBTQ+ individuals, including the law colloquially known as ‘Don’t Say Gay,’ we do not believe it is a safe place for our community at this time,” the organization said in a Sept. 8 statement.

But as is the case with many institutions in America these days, the radical Left infiltrated Games Done Quick and twisted it to its own ends.

Soon, LGBT charity The Trevor Project sneaked its way into the lineup, and event organizers began to enforce leftist dogma at all events.

Two featured participants during a Games Done Quick event in 2017, who go by the online names PvtCinnamonBun and Cyberdemon531, were banned from the event for allegedly wearing MAGA hats.

On top of that, Cyberdemon531 attracted negative attention for reportedly creating a forum on the social media site Reddit that was critical of another transgender gamer.

Games Done Quick banned a Spanish gamer, who goes by the name Luzbelheim, from participating in the group’s events for 18 months over his anti-feminist views and support for Vox, a Spanish national conservative party.

That focus on leftist posturing over raising money for charity has begun to cause problems.

In Games Done Quick’s announcement declaring that it would be canceling its in-person Florida event, the organization was forced to admit it had taken a hefty financial hit as a result of the decision.

“While the move to online will allow us to save some on expenses, we still have considerable costs to recover,” organizers wrote. “We are looking to recover that money where possible, including with community support.”

Money that community members could be donating to fight cancer will now be funneled toward paying for Games Done Quick’s stunt.

Who benefits here? Do the event organizers really think they’re sticking it to Florida Gov. Ron DeSantis and the oh-so-evil Republicans by backing out of a contract and hosting the event online? Does the kid with cancer get the help he needs because some leftist who’s still scared of COVID-19 is unhappy the state won’t force people to get vaccinated?

Of course not, but the radical Left has long since departed from truly caring about the causes it claims to support. What matters more than helping people is the perception that it’s doing something.

Games Done Quick was about unifying people who engaged in a relatively niche hobby toward promoting a social good. Which is why the leftist corruption of the event is even more frustrating.

There is not a single serious person, right, left, or center, who’s against raising money for cancer research. It’s a bipartisan cause. What does Games Done Quick stand to gain from introducing a political lightning rod like LGBT ideology into the event?

Not a whole lot, but it stands to lose support.

Those who would be inclined to give to a good cause like cancer research will have to contend with the fact that their money may go toward a cause they vehemently oppose. Can a possible boost in donations from woke leftists make up for the gap?

In a sense, the Games Done Quick fiasco serves as a great case study for the sheer selfishness of the LGBT movement and transgenderism in particular.

Kids with cancer? Forget that, I’m a woman trapped in a man’s body! Pay attention to me!

One would assume that people would draw a line at sacrificing cancer patients at the altar of gender ideology, but it seems the corruptive nature of the woke Left is stronger than basic human decency.

Games Done Quick started with a noble mission. It has gone astray. For the sake of those cancer patients, let’s hope it comes to its senses soon.