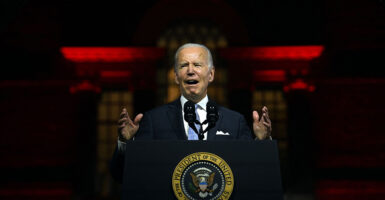 President Joe Biden speaks about the soul of the nation outside of Independence National Historical Park in Philadelphia Sept. 1, 2022. (Photo: Jim Watson/AFP/Getty Images)

The Left’s vision for America has grown increasingly dark. Its embrace of identity politics has morphed into an all-out drive for divisiveness, demonizing huge swaths of the American people for purely political purposes.

The most recent examples of this came last week when President Joe Biden labeled tens of millions of his own constituents—Americans who oppose his far-left policies—as “semi-fascists.” Days later in Philadelphia, he unleashed one of the most divisive speeches a sitting president has ever delivered.

The optics for this prime-time address were as bad as his rhetoric. Bottom-lit in scarlet, Biden appeared like a character from Dante as he clinched his fists and insisted that he was fighting a battle for the soul of our nation. But his angry, hectoring screed showed he’s fighting on the wrong side.

Not that anyone familiar with Biden’s career should be surprised. This is the man who said Mitt Romney and Paul Ryan wanted to put black Americans “back in chains,” who discharged soldiers for not getting the COVID-19 vaccine and tried to force law-abiding civilians out of a job, who conspired with Orwellian technology corporations to censor dissent, who engineered an international humiliation in Afghanistan, who created a deadly border crisis, who spawned historic inflation, and who sicced the FBI on his political opponents and parents who protested failing school boards.

The common thread running through all of these outrages is divisiveness—something that runs counter to our country’s traditional motto: e pluribus unum (“out of many, one”). Yet the Left would have us believe that it’s the critics of these outrages, not the authors of them, who are “threats to the republic?”

The true soul of our country is the American people. The families whose schools were closed, whose communities are beset by violent crime, whose children are being indoctrinated and sexualized in their classrooms, who were already paying more than ever for gas, food, and rent and are now paying off the student loans of lawyers, professors, and White House aides.

For two years now, Biden has promised results, and the mainstream media has assured us that better days are right around the corner. Yet so far, he has produced a recession, rampant inflation, violent emergencies foreign and domestic, and repeated assaults on the Constitution he swore to defend. As for his promise to be the Great Uniter, all he has delivered is deeper, more bitter division.

If anyone is a danger to the soul of this nation and what America represents in the story of human history, it’s Biden and his far-left allies.

The American people know it. Polls show it.

Yet Biden’s speech in Philadelphia made very clear that he has every intention of ramming his deeply unpopular agenda—for our government, our economy, our energy, our schools, our border, our security, and his crime wave—down Americans’ throats unless and until he is stopped.

Conservatives must fight back—not simply by attacking the woke, Marxist Left, but by engaging the millions of hardworking families being left behind by its self-serving, elitist agenda and helping them make their voices heard. It’s not enough to express our displeasure over the Biden-led lurch to the left; we must build a coalition and agenda to turn our nation around.

On the economy, education, immigration, Big Tech, the right to life, China, crime, opioids, and the crisis of the American family—conservatives cannot be cowed by Biden’s divisive partisanship. We must be energized by it, inspired to rise above it, and help our nation do the same. And we must do it as we have done it successfully in the past: together.