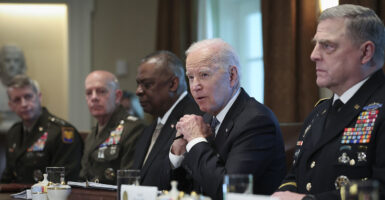 A YouGov poll found only 15% of Amerians say they want the U.S. to spend more than other wealthy European countries on aid to Ukraine. Yet, President Joe Biden plans to spend an additional $3 billion to provide military assistance to Ukraine, even though the U.S. has spent more on Ukraine than any other country combined. Pictured: Biden meets with members of the Joint Chiefs of Staff in the White House Cabinet Room on April 20, 2022. (Photo: Win McNamee/Getty Images)

As the Biden administration is requesting an additional $13.7 billion to help Ukraine between October and December, one YouGov/Stand Together poll found that most Americans would put conditions on further funding for Ukraine.

Of the 1,000 participants surveyed, 42% said the United States should be less militarily engaged in international conflict, while 37% said our level of engagement should remain the same. Only 7% said the U.S. should be more engaged in military conflict abroad.

Among three views offered, a minority of participants (20%) agreed that “the United States should support Ukraine for as long as it takes, even if American households will have to pay higher gas prices and food prices, as well as higher taxes, as consequences.”

Over half (54%) agreed with the following viewpoint:

The United States should only continue to support Ukraine if European allies are willing to show a similar amount of support. The costs of supporting Ukraine should not be born primarily by American households, even if that means Ukraine may end up losing some territory to the inaction of wealthy European countries.

Twenty-seven percent said the United States should stop supporting Ukraine after the Biden administration sent more than $50 billion in aid and other European countries began to withdraw support.

Of those surveyed, the poll found Trump supporters tended to be more wary of additional aid to Ukraine than independents and Biden supporters.

“Support for an independent Ukraine is clearly in America’s interest,” James Carafano, vice president of the Davis Institute for National Security and Foreign Policy at The Heritage Foundation, told The Daily Signal shortly after leaving Ukraine. “It is a head-butt to Russian and Chinese designs to destabilize Europe and marginalize U.S. Ukrainians would be first to tell you there would be no Ukraine today without U.S. military aid, which was started by President [Donald] Trump.” (The Daily Signal is Heritage’s multimedia news organization.)

Even so, Carafano noted that Americans are concerned about how the money will be spent.

“Americans helped Ukrainians and they did something in their own interest,” he added. “Many are rightly concerned about how money is spent, especially on the civilian side. They are right we should never waste a tax dollar.”

“The United States has provided more aid to Ukraine than nearly every other country combined, despite the limited American national interests at stake in the conflict,” Dan Caldwell, senior adviser at Concerned Veterans for America, said in a statement. “With so many pressing challenges at home and in other parts of the world, the American people clearly don’t want Uncle Sam to continue to play Uncle Sucker in Europe.”