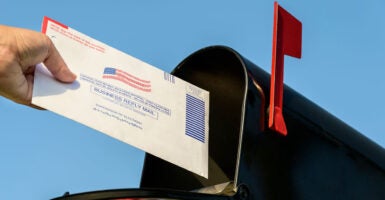 A Delaware court has determined a law that allows any voter to ask for a mail-in ballot violates the state's constitution. (Photo illustration: Tetra Images/Getty Images)

A vote-by-mail law approved in July does not bode with Delaware law and the process cannot be used in the upcoming November elections, a state judge ruled Wednesday.

Delaware Gov. John Carney, a Democrat, signed a bill July 22 that allows any voter to ask for a mail-in ballot with no excuse. But Vice Chancellor Nathan Cook of the Delaware Chancery Court determined the law violated a provision of the state’s constitution that lays out situations when a voter can vote by absentee ballot.

The constitutional provision dictates that absentee voting is permitted in certain situations, like when a voter is “unable to appear to cast his or her ballot at any general election” or is “in the public service.”

“Our Supreme Court and this court have consistently stated that those circumstances are exhaustive,” Cook wrote in his ruling. “Therefore, as a trial judge, I am compelled by precedent to conclude that the vote-by-mail statute’s attempt to expand absentee voting to Delawareans who do not align with any of Section 4A’s categories must be rejected.”

The ruling came after a lawsuit was filed in February against the Delaware Department of Elections alleging that both permanent absentee voting and early voting “conflict” with the Delaware Constitution. The lawsuit was filed on behalf of Michael Mennella, an inspector of elections in the state, by the Public Interest Legal Foundation, a conservative nonprofit.

“This ruling upheld the rule of law in Delaware when not long-ago election officials across the country were ignoring the law,” said Public Interest Legal Foundation President J. Christian Adams. “This law violated the election protections in Delaware’s Constitution. Election officials must follow the law. When laws are followed, even losers of elections can agree with the outcomes. Consent of the governed increases when the election rules are followed.”

Democrats in Delaware put forth the mail voting bill in June on the heels of Republicans disapproving the idea of amending the constitution, the Delaware Call reported. Constitutional amendments must be passed with a two-third majority vote in both chambers, the outlet reported.

There was a mail voting law passed in 2020 in Delaware due to the COVID-19 pandemic, according to The Associated Press. It expired on Jan. 12, 2021.

Delaware’s Chancery Court declined the Daily Caller News Foundation’s request for comment and the governor’s office did not respond.