The ‘Secure Border’ of Kamala Harris 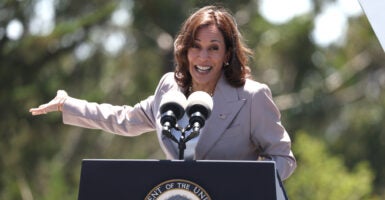 When Donald Trump was president, the Border Patrol in fiscal year 2019 did not encounter a single individual on the terrorist watchlist trying to illegally cross the U.S.-Mexico border between legal ports of entry.

In the first 10 months of this fiscal year, according to U.S. Customs and Border Protection, the Border Patrol encountered 66 of them.

These include individuals, as Customs and Border Protection explains on its website, who are “known or suspected terrorists” or “individuals who represent a potential threat to the United States, including known affiliates of watchlisted individuals.”

Did CBP fail to encounter any individuals on the watchlist in 2019 because the Trump administration was less aggressive about securing that border?

Or have 66 been caught this year because the Biden administration has sent a signal to the world that the border is not as secure now as it was three years ago and, thus, has inspired watchlisted individuals to try to sneak in?

Appearing on NBC’s “Meet the Press” on Sunday, Vice President Kamala Harris claimed that the U.S.-Mexico border has indeed been secured and argued that illegal aliens already inside the United States should be rewarded with U.S. citizenship.

“I think that there is no question that we have to do what the president and I asked Congress to do—the first request we made, pass a bill to create a pathway to citizenship,” Harris responded.

“The border is secure,” she continued.

“But we also have a broken immigration system, in particular over the last four years before we came in, and it needs to be fixed,” Harris added.

“We’re going to have 2 million people cross this border for the first time ever,” Todd said. “You’re confident this border is secure?”

“We have a secure border,” Harris repeated, “in that that is a priority for any nation, including ours and our administration. But there are still a lot of problems that we are trying to fix, given the deterioration that happened over the last four years.”

“We also have to put in place a law and a plan for a pathway to citizenship for the millions of people who are here and are prepared to do what is legally required to gain citizenship,” she said.

People who were “prepared to do what is legally required to gain citizenship” legally applied for immigrant visas before they came to the United States, came here legally, and now are living here legally on a legal path to citizenship.

Harris is talking about people who have violated the law, either by overstaying a visa or by illegally sneaking across our southern border.

America has the most generous legal immigration policies of any nation on Earth.

In 2019, the same year that the Border Patrol did not encounter a single person on the terrorist watchlist at the U.S.-Mexico border, the United States naturalized 843,593 foreign-born citizens.

These new Americans came from all across the globe, according to data published by the Department of Homeland Security.

The 813,861 people who became naturalized U.S. citizens in 2021 almost equaled the entire population of San Francisco, which the Census Bureau says was 815,201 that year.

Clearly, the United States has not closed its doors to law-abiding people who immigrate here in keeping with our laws.

What has happened along our border in the past three years? In fiscal 2020, Trump’s last full year in office, Customs and Border Protection reported that it encountered 458,088 people trying to illegally cross the U.S.-Mexico border into the United States.

In fiscal 2021, the year Joe Biden succeeded Trump, the number of people CBP encountered trying to illegally cross the U.S.-Mexico border jumped to 1,734,686.

“Migrants were encountered 1.7 million times in the last 12 months, the highest number of illegal crossings recorded since at least 1960,” The New York Times said Oct. 22, 2021.

“It was the highest number of illegal crossings recorded since at least 1960, when the government first began tracking such entries,” the Times said.

The Washington Post reported on April 2, 2021—more than two months after Biden took office—that the number of illegal border crossers who successfully evaded the Border Patrol was surging. The Post reported:

Nearly 1,000 people per day are sneaking into the United States without being identified or taken into custody because U.S. border agents are busy attending to migrant families and unaccompanied children while also trying to stop soaring numbers of male adults, according to three U.S. Customs and Border Protection officials familiar with the data.

While CBP has never claimed to interdict every border-crosser, the number of ‘gotaways’ recorded in recent weeks is the highest in recent memory, said two of the officials, who spoke on the condition of anonymity because they were not authorized to publicly discuss the data.

The Biden administration is setting another record for the number of illegal border crossers encountered by Customs and Border Protection.

This is what Harris calls a “secure border.”