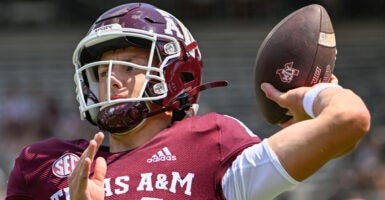 The Texas A&M Aggies football team warms up before a game Saturday in College Station, Texas. Making the school's football team is a meritocratic process, but a lawsuit filed the same day against the school asserts that its hiring process for faculty positions is anything but meritocratic. (Photo: Ken Murray/ Icon Sportswire/Getty Images)

Richard Lowery, an associate professor of finance at the University of Texas at Austin, filed a complaint in federal court in Houston, saying the policies at Texas A&M prevented him from being hired at the university. Lowery alleges that the university uses “racial preferences” to determine its hires for faculty positions, favoring “underrepresented minorities” over white and Asian men.

“These discriminatory, illegal and anti-meritocratic practices have been egged on by woke ideologues who populate the so-called diversity, equity and inclusion offices at public and private universities throughout the United States,” the lawsuit stated.

“America First Legal has filed a landmark class-action lawsuit against Texas A&M University for its illegal and unconstitutional racial discrimination regime,” America First Legal President Stephen Miller, who is representing Lowery, said in a press release. “Texas A&M is hiring—and excluding—professors solely due to the physical appearance of their skin or the ancestry of their family tree. This is vile and outrageous. We must extract the poison of bigotry coursing deep through the leadership of Texas A&M and restore civil rights and equality for all.”

Women and “non-Asian racial minorities” are primarily preferred for new positions, better pay, and promotions, the lawsuit alleged. The suit asks that the school appoint a position to supervise the “diversity office” and the hiring process, providing oversight.

“Granted, it’s an unusual job application when Mr. Lowery says in the lawsuit he is ‘able and ready’ to apply for a faculty appointment at Texas A&M,” Laylan Copelin, vice chancellor of marketing and communications for the Texas A&M University System, said in a statement to the Daily Caller News Foundation. “But our lawyers will review the lawsuit, confer with Texas A&M and take appropriate action as warranted.”

Lowery’s attorney referred the Daily Caller News Foundation to its press release when asked for comment.