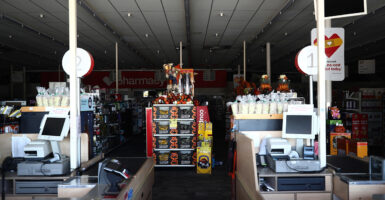 California's governor is begging its citizens to stop using their appliances, turn off their lights, and keep their thermostats at a stifling 78, lest they suffer more rolling blackouts. Pictured: A CVS is closed due to power outages on Oct. 10, 2019, in Marin City, California. (Photo: Ezra Shaw/Getty Images)

If California, our most populous state, were its own nation, it would rank as the world’s fifth-largest economy and boast the highest average household income (outside a handful of “countries” like Monaco or Luxemburg).

And, yet, the governor is begging its citizens to stop using their appliances, turn off their lights, and keep their thermostats at a stifling 78, lest they suffer more rolling blackouts, like some junior mandarin in a Third World country.

Of course, I kid when I say that California is already experiencing the effects of the Green New Deal. A state that still derives more than 66% of its energy from nonrenewable sources, has tens of trillions of dollars to go before it meets President Joe Biden’s promise of a 65% reduction in emissions by 2030. The flooding of an already rickety grid with undependable renewables offers only a small taste of the “transition” to “clean energy.”

Because you can scaremonger about climate change all day long and ratchet it up to insane levels, but no one escapes the laws of physics or economics. California has been forced to extend the life of its last nuclear power plant at Diablo Canyon and gas-fired power plants to save the state from being plunged into darkness rather than the occasional blackout.

As it turns out, most people are only theoretically fans of deindustrialization.

California is following in the footsteps of Germany, which over the past 10 years closed down most of its nuclear power plants and engaged in a national decarbonization of the economy—energiewende. When reality hit, Germany, and thus the rest of the EU, was compelled to start relying heavily on Russian natural gas as it struggled to transition. Then Russia attacked Ukraine.

Rather than falling back on its world-class, environmentally friendly, forward-looking nuclear-energy program, the Germans must now contemplate rationing and historically high prices. If they can avoid this fate, it will only be because the industry has turned back to coal.

Even before the Ukrainian war, Germany was home to the highest global electricity prices per household in the world. As Robert Bryce points out, though California’s households use only about half the national average in energy, they also pay one of the highest rates in the nation—only Hawaii and Alaska beat them. Continued restrictions on reliable, relatively cheap, and portable energy are not only inconvenient, but they also damage growth and opportunity. Decarbonization is objectively immoral.

One of the problems is that California has the power to export its retrograde ideas. Although electric car owners in the Golden State can’t go anywhere these days, the state still plans to ban the sale of gas-powered cars in just 13 years (your used car is going to be worth a fortune).

But since 15 states, including New York and Pennsylvania, have adopted California’s vehicle emissions standards—a federal waiver under the Clean Air Act allows it to have stronger fuel economy standards than the federal government—a cult of Luddites in Sacramento now effectively controls the national automotive industry.

If there was any real big organic demand for EVs, the federal government wouldn’t have to keep massively subsidizing—bribing—the industry into manufacturing them, and California wouldn’t have to mandate you to buy them. Less than 1% of cars, SUVs, and light trucks on the road in the United States are electric.

Right now, electric cars are for wealthy people more concerned about pricey virtue signaling than functionality. A recent University of California at Berkeley study, for example, found that 90% of tax credits for electric cars go to people in the top income quintile.

That’s fine. Knock yourself out. But Democrats are rigging the market to force you to buy a car that has a 200-mile reach and uses erratic and expensive energy when you already have increasingly efficient models in your driveway and tens of billions of easily accessible barrels of offshore fossil fuels here at home—and much more around the world. We have centuries’ worth of the stuff waiting in the ground. Which gives us enough time to come up with some better ideas.

Because, sorry, transitioning away from modernity and into windmills, choo-choo trains, folding fans, and candles isn’t progress; it’s regression. And California is leading the way.