Orthodox Jewish Schools Share Priorities of Most Americans, Regardless of What NY Times Says 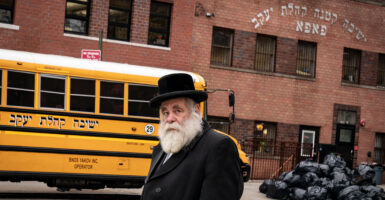 A man walks past a school bus near the Yeshiva Kehilath Yakov School in the South Williamsburg neighborhood of the Brooklyn borough of New York City on April 9, 2019. Yeshivas—Orthodox Jewish schools—are despised by many among the ruling elites. (Photo: Drew Angerer/Getty Images) 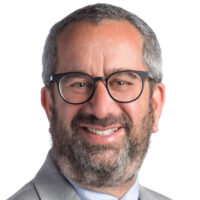 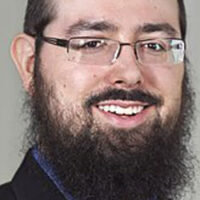 The New York Times is once again preparing to release a hit piece on Orthodox Jewish schools, also known as “yeshivas.”

The attack comes just before a key state Board of Regents meeting, apparently timed to support a push to regulate the content of instruction in those schools so that it’s “substantially equivalent” to that found in public schools.

If past is prologue, the Times article will feature selected negative anecdotes and out-of-context distortions of outcome data for yeshiva students. Rebutting all of those slanders is a Sisyphean task, as new anecdotes and further distorted statistics can be generated to replace whatever is debunked.

In truth, the hostility toward yeshivas is not as much grounded in empirical facts as it is in a philosophical worldview. To the elite readers of The New York Times, the primary purpose of education is to convey economically useful skills and politically desired dispositions so that their children can maintain their status in the ruling class.

They hold that view without reflection or even awareness that others might think that education should serve different, legitimate purposes.

The hostility directed at yeshivas is generated by the fact that those schools so clearly reject the elites’ view and are designed around a very different purpose of education. While the content and method of instruction provided by yeshivas differ dramatically from that found in most schools, their purposes much more closely resemble those shared by most Americans, even if they differ from those held by the elites.

Rather than focusing on the skills that are required to gain status and power, the yeshivas and schools favored by most Americans are focused on developing the character of children so that they grow up to be decent human beings.

That includes loving their family, caring for their neighbor, dealing honestly with the stranger, and obeying the law. It also includes understanding that they have meaning in a world that was created with a purpose. Those are the building blocks of strong communities and a well-functioning society.

Given rising rates of depression, aimlessness, drug abuse, self-mutilation, and suicide among young people in modern society, it’s easy to understand why so many Americans hew much closer to the yeshiva view of education than that of the ruling elites.

Risking one’s soul for the golden ring of power is a model of education that only those obsessed with status would dare embrace.

Those who hate the yeshivas do not do so out of concern for the well-being of the students. They cannot imagine that those children would fare better if only they attended nearby public schools in Brooklyn with shockingly low rates of literacy and numeracy, along with rampant violence.

Their hatred of the yeshivas is a response to the ostentatious rejection of the status-seeking rat race that the yeshivas represent. That rejection must be crushed and made an example of.

Most Americans would be undisturbed by the focus at yeshivas on character formation. But they would be less sympathetic to the yeshivas if they came to believe that the graduates of those schools were so lacking in economically useful skills that they could not provide for themselves and became dependent on public assistance at abnormally high rates.

That is the one empirical claim that would really sway broader opinion about yeshivas and is therefore worth rebutting directly.

While the Hasidic families whose children attend the yeshivas do have a high rate of poverty relative to the national average, it is important to note that it isn’t higher than that of other communities that live in their area whose children predominantly attend public schools.

According to a Pew report, 45% of “Hasidic, or ultra-Orthodox, Jewish households,” with the largest concentration located in New York, earned 150% or less of the poverty threshold. The city of New York issued a report using the same standard of 150% of the poverty threshold, and in the same year found that 44.2% of New York City households similarly fell below that line.

It’s also important to keep in mind that Orthodox Jewish families tend to have many children, and the poverty threshold is adjusted to reflect family size, meaning that the amount earned by those households might be substantially higher than others in New York City, but still place them below that poverty threshold.

The economic circumstances of many families in New York might be lamentable, but there’s no evidence that the communities served by yeshivas are exceptionally poor and dependent on government assistance relative to their neighbors who attend public schools.

Orthodox Jews, like most other Americans, want their children to earn a living, but are unwilling to sacrifice their core values to adopt the elites’ preference for maximizing wealth and status. Families want to raise their own children with their own values, whether in yeshivas, other religious schools, or traditional public ones, and no one is strong enough to stop them.