The Latest Jobs Numbers Seem Impressive, Until You Look Closer 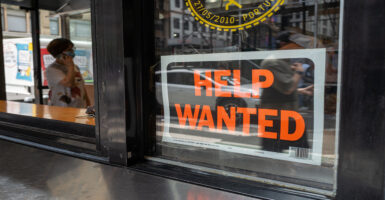 The latest Labor Department employment report shows the economy added 315,000 jobs in August, ordinarily a healthy increase and sign of a robust economy. Sadly, the devil is in the details, which shows that the labor market is running on fumes. Pictured: A sign is displayed on July 28 in New York City. (Photo: Spencer Platt/Getty Images)

The latest Labor Department employment report shows the economy added 315,000 jobs in August, ordinarily a healthy increase and sign of a robust economy. Sadly, the devil is in the details, which shows that the labor market is running on fumes. The report, like the economy as a whole, looks good from afar but is far from good.

The first red flag in the report was revisions to the previous two months, which totaled 107,000 to the downside. So about a third of the jobs added in August were jobs we thought the economy already had.

While this headline jobs number comes from a survey of businesses, the unemployment rate and other details come from a survey of households, and that also contained troubling data. The household survey actually peaked back in March and has never recovered to its pre-pandemic level. And while labor force participation rose overall in August, a healthy indicator, it fell for blacks, as did the number of blacks employed.

Yet another cause for alarm is weekly earnings, which were flat in August. When those numbers are adjusted for inflation, real weekly earnings will be negative; that means workers are demonstrably poorer because prices are rising faster than incomes.

These stagnating weekly earnings are not surprising when other data is considered. Businesses are facing tremendous uncertainty and are hiring fewer full-time employees and more part-time ones. The number of full-time workers peaked in May and continued falling in August. Although wages are rising, the average workweek continues to decline, so weekly earnings are still flat.

But there are still more problems under the hood. The survey of businesses allows for double-counting of some job holders, and there is considerable evidence that this double-counting has accelerated recently.

For example, people holding multiple jobs are counted for each job they have. Also, when someone transitions from self-employment to working for someone else, that is counted as a new job, even though there is no net gain in employment.

Accounting for this and the downward revisions from the previous two months, there were technically no jobs added in August.

The headline jobs number appears strong, but the reality of the labor market, like the rest of the economy, is more anemic. The economy already contracted in the first half of the year and the headwinds are building.

For example, the housing market is in freefall, with the typical monthly mortgage payment up 54% to over $1,900 in the last year, while homebuilder sentiment has collapsed, falling every month this year and down 42% since December.

But the trend is broader than the housing market. The Conference Board’s leading economic indicators have trended down for the last six months and, disturbingly, show new orders slowing. Other data from Federal Reserve Banks in Dallas, Philadelphia, Richmond, New York, and Chicago also show new orders declining.

This is troubling because current levels of business activity are only being sustained by a near-record backlog of unfilled orders, which are not being replaced by new orders. Once businesses work through those unfilled orders, there won’t be enough new orders to replace them.

That translates into reduced future output and layoffs, which means unemployment. So, the monthly headline job numbers seen in the news are not only weaker than they appear, but even this illusion will be disappearing soon. These figures are the swan song of an anemic economy weighed down by President Joe Biden’s inflation, regulation, and taxation.

Originally published at The Washington Times.