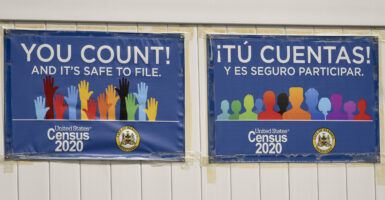 A senior adviser to the U.S. Census Bureau recalls sounding the alarm about the agency’s population count in 2020.

“Me and a couple of other people at the Census Bureau were pounding the table saying there are going to be problems,” Adam Korzeniewski told The Daily Signal.

“The sad thing is that no one cared,” Korzeniewski said.

Critics contend that this inaccurate count now favors blue states over red states in determining Electoral College votes and seats in the House of Representatives for the next decade.

Red regions of the United States traditionally complete census forms at a higher rate than do blue regions, Korzeniewski said. So Census Bureau career staff generally use certain procedures to estimate the population in undercounted regions, he explained.

Because of the COVID-19 lockdowns, far less in-person enumeration occurred in 2020 than in past years. This caused staff to rely more on estimates to “correct the census into what they think it should be,” Korzeniewski said.

The Census Bureau’s Post-Enumeration Survey shows how the 2020 census counted the total population by creating an independent estimate of the number living in the U.S. since April 2020.

These six states now could have smaller delegations to the House of Representatives and fewer Electoral College votes than their respective populations should provide.

If undercounted states opted to sue the Census Bureau under the principle of “one man, one vote” or other grounds, it would mark a landmark case for the Supreme Court, Korzeniewski said.

The more likely scenario, he said, is congressional hearings being held or a future president seeking an independent review:

This should be bipartisan. There needs to be serious hearings into this now. Democrats won’t do it because they got what they wanted. You have political apathy on one side, while the other side is taking a victory lap.

The Census Bureau maintains that the reassessment of its 2020 count is “not definitive.”

“Post-Enumeration Survey estimates are based on a statistical sample and created as one tool to help data users understand the quality of the census counts and help [the] Census Bureau plan for future surveys,” a Census Bureau spokesperson told The Daily Signal in an email.

Under the overcount and undercount, Florida lost out on two additional seats it should have gotten in the House and two Electoral College votes, wrote Hans von Spakovsky, a senior legal fellow with The Heritage Foundation, parent organization of The Daily Signal. Texas lost one House seat, von Spakovsky wrote.

Meanwhile, he noted, Minnesota and Rhode Island each kept a House seat they should have lost under an accurate count, while Colorado gained a House seat it didn’t deserve, von Spakovsky wrote.

The Census Bureau contends that the impact of the overcounts and undercounts of some states is minimal.

“The results of the PES do not change official 2020 census data, such as the apportionment data used to apportion the U.S. House of Representatives,” the Census Bureau says of the Post-Enumeration Survey in its statement to The Daily Signal. “Furthermore, the PES universe excludes people living in group quarters and remote Alaska areas, while apportionment must take into account the entire U.S. population.”

The statement from the Census Bureau continues what the agency has done since release of the survey in May, von Spakovsky said.

“The Census Bureau still does not explain how and why those errors occurred,” he told The Daily Signal. “The change in overcounts and undercounts in 2010 and 2020 is quite different.”

The bureau says the survey is just one means of getting closer to an accurate accounting of the U.S. population:

While PES provides a valuable tool that helps us gain insight into the quality of the 2020 census, it alone is not definitive. As a survey, it’s important to remember that results from the PES are estimates that are subject to various errors. Many of these are described in the Source and Accuracy statement and other methodological documents.

The Census Bureau’s statement also contends that the Post-Enumeration Survey shouldn’t have a significant impact on the amount of federal funds that go to states.

“In regards to funding, it’s important to understand that the Census Bureau doesn’t determine funding formulas or how our data are used,” the Census Bureau spokesperson told The Daily Signal. “Our role is to provide quality data through a host of data products such as the annual population estimates, various surveys, and the decennial census. Together, these data inform how hundreds of billions of dollars in federal, state, and tribal funds are distributed each year.”

Still, the Census Bureau argued that 2020 overcounts and undercounts “were not outside the range of variability we have come to expect from prior decades.” The agency added: “So, while informative, the 2020-to-2010 state-level comparisons cannot be considered definitive.”

No legal remedy exists to fix the count, according to the Census Bureau’s website, which asks: “Based on the PES results, can states change their 2020 census counts?” The response reads: “The quick answer is ‘No.’”

“The estimates demonstrate the Census Bureau’s commitment to transparency and are a key tool for the Census Bureau to build and apply lessons from the 2020 census while planning for the 2030 census.”