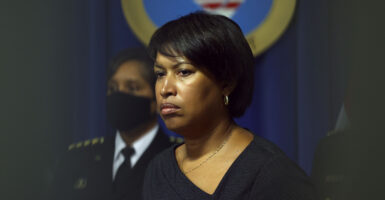 "The crisis at the border is not lessening, it’s getting worse,” says D.C. Mayor Muriel Bowser, pictured during a press conference Feb. 28, in Washington, D.C. (Photo: Justin Sullivan/Getty Images)

Washington, D.C., Mayor Muriel Bowser declared a public emergency Thursday in response to the efforts of Texas and Arizona to bus illegal migrants to the nation’s capital.

The declaration allows more funding to go to supporting the illegal migrants and to give the city more power to provide resources to address the growing issue, Bowser, a Democrat, said during a news conference.

Govs. Greg Abbott of Texas and Doug Ducey of Arizona, both Republicans, began busing illegal migrants from the border to Washington, D.C., to send a message to the Biden administration about the border surge in April and May, respectively.

“The crisis at the border is not lessening, it’s getting worse,” Bowser said.

“We recognize that we don’t know and have no control on all that is coming towards the district, but we do have control on how we make sure that our values are present in all that we do and the hard work that we have done to build our system for D.C. residents is not broken,” Bowser said.

Bowser will also seek to codify the new provisions to support the illegal migrants through emergency legislation.

Abbott spokesperson Renae Eze called Bowser “an absolute hypocrite” for her decision, in a statement to the Daily Caller News Foundation.

“Mayor Bowser is an absolute hypocrite. In a city with a population over 700,000, she’s claiming an emergency for just over 7,900 migrants being bused into her sanctuary city,” Eze told the Daily Caller News Foundation. “That’s barely 1% of the population of Washington, D.C. The true emergency is on our nation’s southern border—not in our nation’s capital—where small Texas border towns are overrun and overwhelmed by hundreds of migrants every single day as the Biden Administration dumps them in their communities.”

Bowser previously requested that the National Guard be deployed twice and both times, her request was rejected. President Joe Biden and the White House are partially to blame for the lack of federal support, Bowser said.

Bowser previously accused both Abbott and Ducey of “tricking” illegal migrants into boarding the buses to Washington. However, illegal migrants that arrived on Ducey’s buses recently denied the claim in exclusive interviews with the Daily Caller News Foundation.

There are currently 348 people in hotels that the city is using as temporary shelters, Bowser said. Meanwhile, U.S. Customs and Border Protection authorities have encountered over 1.9 million migrants at the southern border between October 2022 and July 2022, according to agency data.

“We’re told that with uncertainty in the political system as well as just weather, for example, that numbers increase during this time of year. And, so, we also know the political statements that we’ve heard from Texas and Arizona. So, our expectation is believe what they’ve said and that hundreds of more buses will be coming over the fall,” Bowser said.