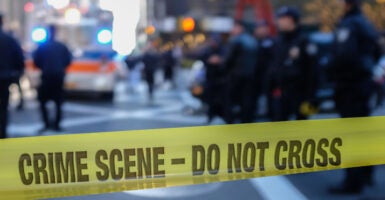 What’s missing from this report?

The Washington Post tells us that Jorge Orozco-Sandoval, 35, dropped off more than $300,000 to an undercover U.S. agent at a Target parking lot 90 minutes’ drive from the White House. That he was a courier for the Jalisco New Generation Cartel. That he had previously done time in a Maryland prison sentence for possession with intent to distribute. And that he’d been deported to Mexico in 2010.

But missing from the article is any information about Orozco-Sandoval’s immigration status. How did a criminal drug dealer, deported back to Mexico over a decade ago, get back into our country? Under the Immigration and Nationality Act, Orozco-Sandoval was clearly ineligible for a U.S. visa.

Of course, we can guess how this recidivist gangster came back in. Most likely he slipped across an area of the border left unattended by Border Patrol officers who have been reassigned by the administration to process asylum applications rather than enforce our immigration laws.

Thanks to President Joe Biden’s wide-open border policies, millions of illegal immigrants each year and thousands of pounds of illegal drugs every month are pouring into our country.

Meanwhile, America’s big cities are being victimized by repeat offenders on an unimaginable scale. In New York City, leftist bail reform and see-no-evil “progressive” prosecutors have allowed a mere 10 (count ‘em, 10) offenders to commit over 485 crimes since 2020.

Last week, a man was arrested for violently assaulting a New York City transit worker. It was his 41st arrest—the 40th was for sucker punching a woman on the street. Even New York Mayor Eric Adams says that releasing offenders with low or no bail is “destroying the fabric of our city.”

What do the border and crime situations have in common? In both cases, the public’s right to know has been sacrificed to the “progressive” media’s desire not to offend.

They often note the ethnicity or immigration status of crime victims, but when it comes to identifying perpetrators, woke reporters and editors feel that information is as unimportant as shoe size or favorite food — unless the criminal fits the media’s profile for “privileged.”

They argue that the immigration status of people like Orozco-Sandoval, or Gershon Fuentes, an illegal alien from Guatemala charged with raping a 10-year-old girl in Ohio, or José Paulino Pascual-Reyes, an illegal alien from Mexico charged with sequestering and assaulting a 12-year-old girl in Alabama after killing her brother and mother, is irrelevant to their crimes.

San Francisco booted its feckless District Attorney, Chesa Boudin, out of office, but there are plenty of prosecutors left in cities like New York, Philadelphia and Chicago who share his twisted ideology: that a criminal’s right to “social justice” trumps the public’s right to safety.

When people are being sucker-punched in broad daylight, or pushed onto subway tracks, the public deserves to know if perpetrators were let out with no bail, so that they can weigh the risks and rewards of their elected officials’ policies on public safety.

Similarly, if drug cartel operatives like Orozco-Sandoval are in the country illegally, the public deserves to know so they can weigh the risks and rewards of an immigration policy that admits hundreds of thousands of unvetted people.

The cartel Orozco-Sandoval worked for is “one of the five most dangerous transnational criminal organizations in the world, responsible for trafficking many tons of cocaine, methamphetamine and fentanyl-laced heroin into the United States,” according to the Justice Department.

Department of Homeland Security Secretary Mayorkas apparently shares Biden’s belief that borders should be open to virtually all comers. They have instructed border agents to process known arrivals (who often have no proof of identity) on a mass scale and move them quickly into the interior, with no notice to local communities or officials.

Meanwhile, another 900,000 have entered the country over the last two fiscal years without seeing any U.S. officials at all. Many of these “gotaways” are criminals, and some are known or suspected terrorists. Americans should not have to absorb this risk.

Just as rogue prosecutors who favor letting violent, incorrigible, repeat offenders out of jail in the interests of “social justice” should stand behind their policies, Biden and Mayorkas shouldn’t be able to hide from the consequences of their border nihilism with the collusion of the press.

National media outlets have a duty to inform the public so that voters know the facts about criminals — including immigration status — to hold elected officials accountable. Hiding relevant information from readers and viewers puts ideology ahead of public safety and betrays a fundamental principle of journalism.

Simon Hankinson is a senior research fellow in The Heritage Foundation’s Border Security and Immigration Center.

ave an opinion about this article? To sound off, please email letters@DailySignal.com and we’ll consider publishing your edited remarks in our regular “We Hear You” feature. Remember to include the url or headline of the article plus your name and town and/or state.