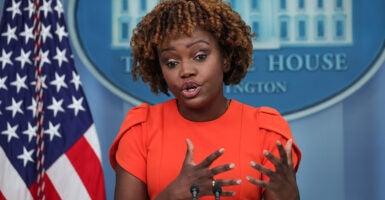 Being the White House press secretary is a notoriously hard job. The press secretary must be up to date on every policy issue engaging the president and his team. The position requires the person who holds it to be articulate, confident, honest, and transparent, while also keeping sensitive information with care.

Unfortunately, current White House press secretary Karine Jean-Pierre has demonstrated, on multiple occasions, a lack of knowledge of important policy issues and Biden administration actions and struggles to answer some questions from reporters.

After President Joe Biden announced the “forgiveness” of up to $10,000 of debt for student loan borrowers, and $20,000 for Pell Grant recipients, Jean-Pierre was asked whether the administration believed the plan is fully paid for.

“So we do, we, so this, again, this is the question that my colleague here ambassador got, so we have to get a better sense, right, of what we are talking about as far as cost,” Jean-Pierre replied.

She added that the Biden administration does “believe it will be fully paid for because of the work that this president has done with the economy.”

“Someone still needs media training,” Beverly Hallberg tweeted in response to Jean-Pierre’s answer. “This is an expected question. To not have a prepared answer that is said seamlessly is astonishing.”

Hallberg is founder and president of District Media Group, a senior fellow at Independent Women’s Forum, and host of the “She Thinks” podcast. Hallberg has trained hundreds of individuals, including staff of The Heritage Foundation, in how to be articulate during a TV interview or while speaking in front of a crowd. (The Daily Signal is Heritage’s multimedia news organization.)

Hallberg joins today’s episode of “Problematic Women” to assess Jean-Pierre’s performance as White House press secretary since she began doing the job May 13.

Also on today’s show, we discuss why Brittany Aldean, wife of country singer Jason Aldean, came under fire after posting a video on Instagram celebrating her “girly life.” Plus, we discuss why The New York Times appears to think maternal instincts are a myth created by men. And as always, we’ll crown our Problematic Woman of the Week.