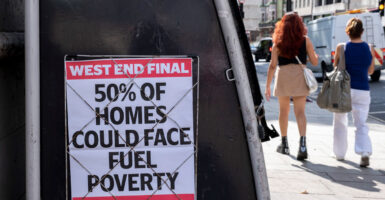 Astronomical natural gas prices are forcing heavy industries, from smelters to fertilizer plants, to shut down or curtail production. Germany’s fabled “Mittelstand”—the collection of mid-sized firms that form the backbone of its economic might—is buckling under the weight of terrible decisions made by climate-obsessed politicians going back decades.

“It’s not good news,” German Economic Minister Robert Habeck said Wednesday of his country’s plight. “[I]t can mean that the industries in question aren’t just being restructured but are experiencing a rupture—a structural rupture, one that is happening under enormous pressure.”

Likewise, Reuters estimates roughly half of Europe’s aluminum and zinc smelters have shut down. Russia’s decision to once again halt gas supplies, this time for three days, will no doubt convince more factories big and small to shut their doors.

More importantly, it’s only August and Germany’s one-year ahead electricity price was still above $540 per megawatt hour as of Wednesday morning. That’s down from the peak, but still sends a clear signal to industry that relief is nowhere in sight.

It’s virtually certain more factories will shutter and curtail production as energy rationing increases and rolling blackouts hit—but the big question is, will they ever come back online?

Could this be the beginning of the long-term, perhaps permanent, de-industrialization of Europe?

Noted environmental economist Richard Tol sees factory closings as temporary—the demand for those goods will come back, he says. But his optimism is tempered.

“If energy prices in Europe continue to be much higher than elsewhere for months and years, then production in Europe will close and products imported instead,” Tol told the Daily Caller News Foundation.

Benny Peiser, director of Net Zero Watch, is more pessimistic. He sees long-term de-industrialization as a serious risk given the commitment of European and global elites to climate policies that caused this energy crisis in the first place.

“The political elite are in total denial,” Peiser said. “They are praying this is a short-term problem, but that’s because they don’t understand what they’ve done to the energy market.”

Even before the first Russian tank rolled into Ukraine, Europe was in the midst of an energy crisis precipitated by its overreliance on renewables—namely wind power. A dearth of wind in 2021 sent Europe’s grid into a tailspin, causing prices—especially for gas—to skyrocket and supplies dwindled.

European nations’ decisions to ban tapping into their own ample natural gas reserves, caving to Russian-backed climate activists no less, came back to bite them. Faced with sky-high prices, entire industries began shutting down. It’s only gotten worse since then.

“The current stratospheric prices should back off some,” said David Kreutzer, senior economist for the Institute for Energy Research. “But there is little, if any, encouragement for developing Europe’s own natural gas reserves.”

At least in the U.K., there’s been a shift toward nuclear power, and Liz Truss, the woman poised to become the next prime minister, has pledged to overturn the ban on “fracking” for natural gas.

European Union leadership has committed to “doubling down on renewables.” In other words, more of the same, but faster.

“There is no chance of the EU’s plan succeeding,” Peiser said. “The solution is fracking and burning more coal. And a nuclear renaissance, but that will take time.”

Europe not only lacks energy, but time as well. Winter is coming. In a matter of weeks, temperatures will begin to drop. If it gets cold enough, more companies will need to close to make sure there’s enough gas and power for home heating.

But across the Continent, poor and middle-class families will likely face an even grimmer decision—do we heat or eat?