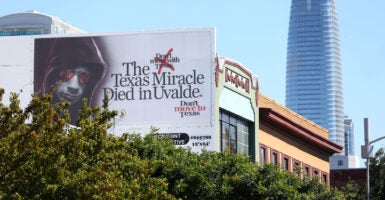 John R. Lott Jr. is the president of the Crime Prevention Research Center. Until January, he was the senior adviser for research and statistics at the U.S. Department of Justice’s Office of Legal Policy, and he worked on voter fraud issues.

A lot of people are moving out of California. Over the last two years, California has lost about 300,000 people. Major companies, including Telsa, Oracle Corp., and HP have abandoned California for Texas.

With high taxes, lots of regulations, high crime, poor schools, mishandling of the pandemic, and “woke” policies, it isn’t surprising that many people have been willing to give up the beautiful state and fantastic weather.

Understandably, some are upset with that turn of events, but the billboards put up in Los Angeles and San Francisco are a cheap shot. They warn Californians about mass public shootings in Texas, specifically pointing to the recent Uvalde school shooting. The billboards warn, “The Texas Miracle died in Uvalde.” They replace Texas’ slogan, “Don’t Mess With Texas,” with “Don’t Move to Texas.”

The billboards have received extensive national and international news coverage. But California, despite all its gun control laws, has more mass public shootings than Texas.

A mass public shooting is an attack where four or more people are murdered. It must occur in a public place and cannot involve some other crime such as a robbery or a gang fight over drug turf.

Since 2000, when California enacted its major assault weapons ban, the state has experienced 10 such attacks. In Texas, over that time, there were six. Since 2010, California has had eight attacks and Texas, five.

By the way, Texas’ violent crime rate has also been lower than California’s in five of the last six years. The Houston Chronicle speculates that the billboards may be paid for by “right-leaning Texans eager to keep liberal Californians away from their voting booths.”

Just nine days before Newsom’s ads, The Associated Press’ highly influential stylebook opposed the use of the term “assault weapon.” It acknowledges that semi-automatic guns aren’t actually weapons of war.

“The preferred term for a rifle that fires one bullet each time the trigger is pulled, and automatically reloads for a subsequent shot, is a semi-automatic rifle,” the AP accurately summarizes, adding:

An automatic rifle continuously fires rounds if the trigger is depressed and until its ammunition is exhausted. Avoid assault rifle and assault weapon, which are highly politicized terms that generally refer to AR- or AK-style rifles designed for the civilian market, but convey little meaning about the actual functions of the weapon.

Eighty-four handguns and a similar number of rifles are semi-automatics for a reason. Semi-automatic weapons are needed to protect people and save lives. Single-shot rifles that require manual reloading after every round may not do people a lot of good. The first shot may miss, or there may be multiple attackers.

At a May press conference addressing the Uvalde murders, Abbott said that stricter gun control laws, such as those in California, are “not a real solution” to ending mass shootings. Assault weapons bans do nothing to prohibit the vast majority of semi-automatic guns, so it is little wonder that banning “assault” rifles does nothing to stop crime.

Under the 1994-2004 federal assault weapons ban, there was no drop in the number of attacks with “assault weapons,” and virtually no change in total mass shootings. The misinformation persists. First lady Jill Biden still called AR-15s “machine guns” at a Democratic National Committee fundraiser in Massachusetts after the AP’s statement.

Texans aren’t running around with machine guns. Many Californians who want safety would be well advised to leave their state.