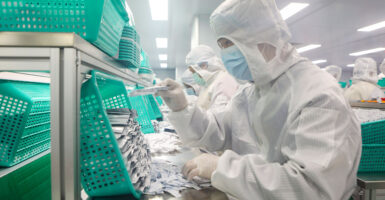 It’s not just the lack of transparency from Beijing about COVID-19’s origins in China that should be of concern to us today with regard to its biotech research. Pictured: Employees work on the production line of COVID-19 antigen rapid test kits at Shenzhen YHLO Biotech Co. Ltd. on Feb. 21 in Shenzhen, China. (Photo: Southern Visual/VCG/Getty Images)

While U.S. intelligence toils to identify the exact origins of the SARS-COV2 (COVID-19) virus in China, there are other good reasons to be concerned about Chinese work in biotechnology that could be used against us and our allies in a crisis or conflict.

While the Biological Weapons Convention allows member states to engage in peaceful research (e.g., vaccine development) to counter and protect against microbial and biological agents and toxins, it prohibits their development, possession, stockpiling, or use for offensive (military) purposes.

With concern, the State Department writes:

The People’s Republic of China (PRC) continued to engage in activities with dual-use [i.e., civilian and/or military use] applications, which raise concerns regarding its compliance with Article I of the BWC.

In addition, the United States does not have sufficient information to determine whether the PRC has eliminated its assessed historical biological warfare (BW) program, as required under Article II of the Convention.

According to the State Department’s April report, China—which joined the Biological Weapons Convention in 1984—possessed a biological weapons  program from the 1950s to the late 1980s that should have been ended, diverted, or destroyed upon joining the convention.

To this day, Beijing hasn’t acknowledged the existence of or current disposition of that Cold War offensive biological program, which weaponized “ricin, botulinum toxins, and the causative agents of anthrax, cholera, plague, and tularemia.”

The State Department report also cautions that more information is provided in a “higher classification annex,” meaning that there may be a slew of details that won’t be released to the public due to the analysis being based on sensitive intelligence sources and methods.

Equally troubling, Beijing postponed a bilateral, virtual Biological Weapons Convention-related meeting in 2021 with the U.S. and canceled a similar meeting in early 2022. Such actions don’t inspire confidence in the age of COVID-19 and our rivalrous relations with Beijing.

The Pentagon’s annual report to Congress in late 2021 on Chinese military power also expresses concern, writing that: “The [People’s Republic of China] continues to develop its biotechnology infrastructure and pursue scientific cooperation with countries of concern.”

Though not directed only at China, the Director of National Intelligence’s 2022 Annual Threat Assessment of the U.S. Intelligence Community amplifies the Pentagon’s warning, writing:

Though specifics from the U.S. government are few in the public sphere—likely due to understandable classification restrictions—the general overview of Chinese military and civilian dual-use efforts and cooperation in the biotech arena is deeply troubling.

Though incredibly important, it’s not just the lack of transparency from Beijing about COVID-19’s origins in China that should be of concern to us today.

The reported work and potential intent of the Chinese civilian and military biological research and technology enterprise could also be a key part of the growing threat that China poses to the U.S., its allies, and friends now—and possibly even more so in the future.