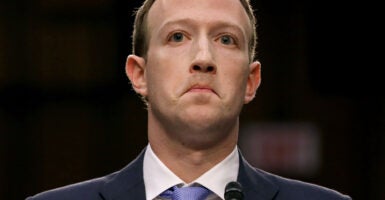 As if the FBI’s reputation were not already in tatters, we have yet another bombshell, courtesy of Facebook CEO Mark Zuckerberg, about FBI malfeasance during the 2020 election.

It turns out that the FBI used its previously concocted Russia hoax as an excuse to pressure Facebook to censor the factually correct Hunter Biden laptop story, which the New York Post broke.

In an appearance Thursday on “The Joe Rogan Experience” podcast, Zuckerberg admitted that Facebook suppressed news of the laptop and its contents in the weeks preceding the 2020 presidential election, after FBI agents requested to meet with Zuckerberg’s staff to deliver dire warnings of a supposed dump of Russian election “misinformation.”

Although Zuckerberg said he couldn’t recall whether the FBI agents specifically mentioned the Hunter Biden laptop story in their warning, he said the story “fit the pattern” that concerned the FBI, so he sprang into action and suppressed the story.

Zuckerberg was oddly proud of distinguishing the mere throttling of the laptop story by Facebook (now Meta) from the outright ban of the story by Twitter.

When pressed by Rogan, Zuckerberg wouldn’t admit to the scale of his company’s censorship of the laptop story, other than to say: “Fewer people saw it than otherwise.” Given Facebook’s gargantuan influence, “fewer than otherwise” likely is many millions—and possibly enough to have flipped the election to Donald Trump rather than Joe Biden had the story been allowed to gain steam.

Americans should listen to this episode of ”The Joe Rogan Experience” without forgetting the context in which Facebook took such drastic censorship action. Back in October 2020, Facebook claimed its suppression of the Hunter Biden story was “part of our standard process to reduce misinformation.” Note no mention of the FBI’s involvement.

Either Facebook’s spokesman, Andy Stone, was lying at the time, or the FBI’s involvement was part of Facebook’s “standard process” all along.

This same FBI had access to the abandoned Biden laptop since 2019, well before Zuckerberg and his team received warnings of impending Russian “misinformation” from the FBI. Once Facebook and others moved to squelch the laptop story, why didn’t the FBI go back to them and say that the Constitution protects freedom of the press and free speech, and that agents never intended the suppression of true stories?

Given how hyperpartisan and anti-Trump the FBI has become in recent years, is it possible that the FBI actually had the damning contents of Hunter’s laptop in mind when the agents approached Facebook with their request that the social media giant suppress political speech?

Perhaps it was the FBI that asked its spy friends on the outside to publish the letter, to give the FBI cover for its pressure campaign on companies such as Facebook. Much like the FBI’s selective leaking of the utterly fake “Steele dossier” to justify its deeper involvement in the Russia hoax, we’ve seen this movie before.

The American people, as has become standard, have been kept in the dark. Why in the world didn’t Facebook disclose its cooperation with the FBI in the suppression of speech? Why didn’t the FBI disclose it?

Lawmakers at the federal and state level should establish standards of transparency and conduct for internet platforms and law enforcement agencies that govern the political discourse that influences elections.

Maybe Facebook has more responsible internal controls than Twitter. But, on the other hand, perhaps it has the same questionable routines to which Twitter has fallen victim: not only being subject to foreign influence, but allowing employees unrestricted access to edit users’ content.

Again, Americans don’t know, because our laws have left the people blind to understanding how unaccountable tech oligarchs govern platforms so central to daily life.

There is a need for baseline standard operating procedures for how digital platforms adjudicate their content decisions. And with these minimum standards should come absolute transparency, available in real time.

No private right of action exists to get the 2020 election back. Voters in Ohio and Pennsylvania can’t recast their ballots, nor seek damages for how Facebook manipulated the truth in October 2020. The rule of law cannot preserve Americans’ fast-eroding trust in the institutions that keep our civil society stable.

No recourse exists for such critical, timely issues of political speech in the digital age. The people’s representatives should establish and enforce rules of the road that prevent another instance in which Big Tech secretly takes the initiative to influence American elections at the behest of the FBI.

Both Big Tech and Big Surveillance (i.e. the FBI) need to be brought to heel.

The most damning sound bite from Zuckerberg’s interview came after Rogan asked whether he regretted blocking the truth.

Zuckerberg responded: “It sucks … I think in the same way that having to go through a criminal trial but being proven innocent in the end sucks … in the end, you’re free.”

This faux apology entirely misses the point. Yes, the truth came out eventually, but only after the FBI’s and Big Tech’s election meddling was done.

Combine Zuckerberg’s revelation with the Russia hoax, the Hillary Clinton emails, and the FBI’s shocking raid on Trump’s private residence, and one gets the feeling that our once-trusted private and public organizations are crumbling and in dire need of reform, by force of law.

This commentary was modified shortly after publication to specify that Zuckerberg told Rogan that he couldn’t recall whether the FBI specifically mentioned the Hunter Biden laptop story in warning Facebook about imminent Russian “misinformation.”