A Vote-Buying Scheme for Affluent Millennials 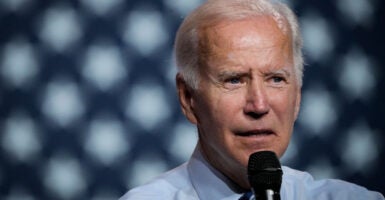 Not long ago, President Joe Biden, pictured in Rockville, Maryland, on Aug. 25, admitted he didn't have the authority to "cancel" student loans "by signing with a pen." (Photo: Drew Angerer/Getty Images)

“No Money shall be drawn from the Treasury, but in Consequence of Appropriations made by Law.” That’s what it says right there in the Constitution. And yet, without any legislation, President Joe Biden now promises to “cancel” up to $10,000 in student loans per borrower ($20,000 for Pell Grant borrowers), limited to those with annual incomes of less than $125,000.

Let’s start by pointing out that Biden isn’t “canceling” or “forgiving” any student loans. Those are preposterous euphemisms favored by Democrats and the media. The debt in question already exists, it has been lent and spent, and those who borrowed the money of their own volition have already received services. This debt isn’t cancelable.

The president hasn’t “forgiven” loans; he’s unilaterally broken existing contracts and transferred the responsibility of payment to taxpayers—many of whom have either repaid their own student loans or never borrowed any money to begin with. Now, if you’re opposed to repaying some stranger’s loan, that’s too bad. A new batch of IRS agents will be there to ensure that you do.

It should also be stressed that capping loan “forgiveness” to those making under $125,000 means absolutely nothing because most borrowers are at the beginning of their careers and have yet to enjoy the durable benefits of a college degree.

The average worker with a bachelor’s degree ends up making, on average, $1 million more in their careers (those with graduate degrees $2-$3 million more) than a worker with a high school diploma. And yet, the Biden administration is going to compel truck drivers and clerks without college degrees to pay the loans of white-collar workers on their way to six-figure salaries.

Now, of course, even if the student loan “forgiveness” was a boon for the poor, it would still be completely unconstitutional, a moral hazard, counterproductive, and fundamentally unjust. But Biden’s plan—which is going to cost taxpayers around $300 billion, more than all the illusory “savings” that were going to be found in the Inflation Reduction Act—is little more than a vote-buying scheme for affluent millennials.

There already exists a slate of programs that help the poor pay for college—and most schools charge families in the lower economic quintiles less. According to a new University of Pennsylvania study, “[b]etween 69 and 73 percent of the debt forgiven accrues to households in the top 60% of the income distribution.”

Another Brookings study found that 60% of all outstanding school loans debt was taken by families making over $74,000—with those borrowers making 75% of all payments. The lowest-income 40% of households “hold just under 20 percent of the outstanding debt and make only 10 percent of the payments.”

By the way, though there is clearly a problem with spiking higher education costs, it’s a myth that most students who graduate with bachelor’s degrees face debilitating debt. According to Brookings, around 30% of undergrads graduate with zero debt, and 25% with less than $20,000. Only 6% of graduates owe more than $100,000.

Half of college debt is held by a quarter of borrowers: Those who go to graduate school. Which is to say, Biden is compelling American taxpayers to foot the bill for graduate degrees.

The government’s guaranteeing of student loans was one of the most corrosive policy ideas in recent history. It has incentivized schools to charge outrageous tuitions (Yale and Harvard now basically function as hedge funds, with massive endowments), encouraged students to rack up massive debt getting often useless degrees (there’s no bank on earth that would lend a kid $100,000 to get a degree in, say, journalism), and allowed banks to hand out giant loans without concern.

Loan “forgiveness,” which is sure to become an expectation moving forward, only exacerbates all these problems.

Not long ago, Biden admitted he didn’t have the authority to “cancel” student loans “by signing with a pen.” Now his administration is rationalizing this power grab on the feeble idea that we are in a national emergency over COVID-19.

Part of me suspects that the administration understands that the president can’t “forgive” debt, and that the effort will be stymied by any Supreme Court that adheres to the Constitution. Democrats likely see the issue as a cudgel they can use to further delegitimize the Supreme Court and hit Republicans as opposing aid of the “middle class.” There is no norm this administration isn’t willing to cynically destroy for political power.