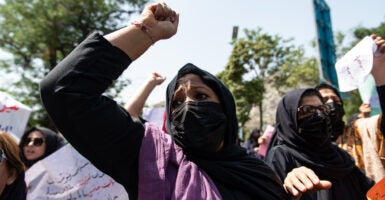 Education, work, and freedoms for women and girls are fading away as the Taliban reverses two decades of hard-won gains in Afghanistan. Pictured: Women chant “Bread, work, and freedom” while marching in front of the Education Ministry building in Kabul during a rare rally Aug. 13 as Taliban fighters fire into the air to disperse the crowd. (Photo: Nava Jamshidi/Getty Images)

The world watched a year ago as Taliban fighters stormed the presidential palace to seize power again in Afghanistan.

The swift fall of Kabul came as a shock to many Americans, who for days were told by President Joe Biden and his administration that the capital city remained secure, and that the U.S.-trained Afghan army remained strong despite U.S. intelligence pointing to the contrary.

With over 20 years, billions spent, and over 2,400 U.S. troops killed, Afghanistan was back where it started with the Taliban in power. The chaotic and humiliating withdrawal of American civilians, Afghan allies, and U.S. troops only added salt to the wound.

Shortly after they took over Afghanistan, Taliban leaders promised to be more inclusive, less repressive, and “committed” to the rights of women. The past year has shown that the men in power may be different, but the Taliban’s perspective on women’s rights has not changed.

Days before students were set to return to school March 22, Taliban leaders stated that schools would re-open for all students, including girls.

But high school girls who arrived for class expecting a warm welcome instead were met with closed doors. Only girls in grade six and under were allowed to attend school, leaving the rest at home with little hope for a secondary education.

In response to the West’s outcry, the Taliban’s leadership has said that it must establish “conditions” so that education is based on Afghan “culture” and “Islamic rules and principles.” One year later, and the Taliban has yet to take any steps to allow girls back in school.

Taliban leadership also made promises to protect women’s right to work. However, only female teachers, government employees, and aid workers are allowed to keep their jobs because their work requires them to have contact with women and girls.

Even so, many women have shared stories of being barred from the office, harassed, or fired, saying they are under pressure to stay home. For widows and sole providers, the choice is simple: sit at home and let their families starve, or risk their lives working to put food on the table.

Travel and dress restrictions make movement difficult for women. As in Taliban-ruled Afghanistan in the 1990s, women must cover their faces, ideally wearing the traditional burqa; must adhere to gender segregation in government offices, universities, and public transportation; and must be accompanied by a male guardian when boarding flights or traveling long distances.

To top it all off, the Ministry of Women’s Affairs has been replaced by the Ministry of the Propagation of Virtue and the Prevention of Vice—a notoriously feared government agency whose patrol vans and “morality” police terrorized women and girls to uphold the Taliban’s harsh interpretation of Shariah law. This ministry was disbanded following the U.S. invasion of Afghanistan in 2001, but now has been reinstated by the Taliban.

With fears mounting and no vision of the future, brave Afghan women and girls are fighting back against the Taliban by attending “secret” schools, protesting, and refusing to wear the burqa or cover their faces, among other daily rebellions.

“We will raise our voices against every injustice until our last breath. We will stand against all the tyranny imposed by the Taliban on the people of Afghanistan, especially on women of Afghanistan,” said Monesa Mubarez, a women’s rights activist who has organized several anti-Taliban protests in Kabul.

Mubarez’s message is clear: The women of Afghanistan will not sit idly by as their girls are denied the opportunities that their mothers fought so hard to gain.

The Biden administration, however, already has abandoned Afghanistan to the Taliban, leaving another generation of women and girls on their own to cope with an increasingly restrictive environment and little hope for a bright and prosperous future.