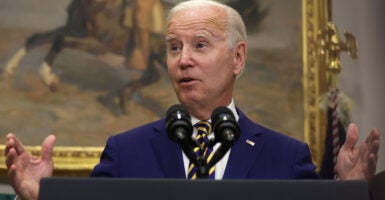 The White House will cancel $10,000 in federal student debt loans for any individual making less than $125,000 a year and $20,000 for those with Pell Grants. Pictured: President Joe Biden announces the student loan forgiveness in the White House on Aug. 24. (Photo: Alex Wong/Getty Images)

After announcing executive action to unilaterally and retroactively wipe away $300 billion in federal student debt, President Joe Biden looked over his shoulder to answer a question: Was this debt forgiveness fair to those who had sacrificed and saved to pay their way through college? Biden deflected.

“Is it fair to people who, in fact, do not own multibillion-dollar businesses,” he replied. “Some of these guys want to give them all tax breaks,” he said, seemingly referring to unrelated Republican tax proposals. “Is that fair?” he asked the reporter. “What do you think?”

Then, the president left. The fundamental question of fairness, however, remains as millions of Americans now search the Department of Education’s website for guidance to see if they qualify for loan forgiveness. Or if they would have qualified had they not repaid their loans earlier.

According to the plan, the White House will cancel $10,000 in federal student debt loans for any individual making less than $125,000 a year and $20,000 for those with Pell Grants.

Republicans quickly complained that the debt amnesty was “a slap in the face to working Americans.” For many working in Washington, D.C., however, it was a sigh of relief.

Student debt forgiveness is personal for the Biden administration. About 1 in 5 of the White House aides required to file a financial disclosure, as Bloomberg News previously noted, reported owing student debt. Collectively, those 30 senior White House staffers owe as much as $4.7 million. Those personal finances are not unusual in the nation’s capital.

There is more outstanding student debt in Washington than in any other city in the country. The average debtor in D.C., according to a 2021 breakdown by the small business analyst AdvisorSmith, owes $54,982 in unpaid student loans. This includes many political staffers at the Department of Education, senior advisers as well as junior aides who moved to that agency from the Biden campaign.

Analysis of financial disclosures by the conservative-leaning American Accountability Foundation found that the political staff at the agency that oversees the student loan program stand to benefit. The outstanding student loan debt balance among 41 education staffers evaluated could amount to between $2.8 and $6.5 million. According to the foundation estimate obtained by RealClearPolitics, the president may have wiped away as much as $512,646 of their debt.

More than 45 million Americans owe $1.6 trillion in federal student debt, a balance that The New York Times reports dwarfs what they owe in car loans, credit cards, and other consumer debt.

The White House insists that the administration’s plan will target low- to middle-income borrowers in particular, with 90% of relief going to earners who make less than $75,000 a year. As many as 43 million people can benefit, according to an administration infographic, and 20 million people “can have their loans fully cancelled.”

It is precisely the kind of relief, Biden said, that the country needs post-pandemic. “All of this means people can start finally to climb out from under that mountain of debt,” the president said. “To finally think about buying a home or starting a family or starting a business. And by the way, when this happens, the whole economy is better off.”

Senate Minority Leader Mitch McConnell called it “student loan socialism.” The Republican Senate minority leader accused the president of delivering “a slap in the face to every family who sacrificed to save for college, every graduate who paid their debt, and every American who chose a certain career path or volunteered to serve in our Armed Forces in order to avoid taking on debt. This policy is astonishingly unfair.”

Tom Jones echoed that criticism. The founder of American Accountability Foundation pointed to the “windfall” that political employees at the Education Department were set to receive, calling it “shameful” evidence of “the gap between the people and the ruling class in Washington, D.C.”

Press spokesmen for the department did not respond to RealClearPolitics’ requests for comment.

Susan Rice dismissed gripes about fairness as “inaccurate” and part of a “double standard.” The director of the White House Domestic Policy Council, previously a visiting fellow at Harvard, an institution with an untaxed $53 billion endowment, told reporters that “Republicans didn’t complain when certain small businesses during the pandemic got extraordinary financial relief without having to pay back those loans.” The forgiven federal loans in question, from student loans and from the pandemic, were part of the same principle.

Rice said it “is fantastic” that some individuals were able to repay their loans already, but “that doesn’t mean that because some people were able to do so, nobody should help those that weren’t. By that logic, we wouldn’t help anybody in this country.”

Democrats repeatedly met Republican criticism with the same rebuttal: What about the GOP tax cut? But criticism wasn’t just coming from the right.

“Doing it while going well beyond one campaign promise ($10K of student loan relief) and breaking another (all proposals paid for) is even worse,” Furman tweeted.

The White House was eager to highlight the sympathetic cases on Wednesday, the “typical nurse” who brings home $77,000 a year and the “typical construction worker” who makes $38,000. “But then why design a policy that would provide up to $40,000 to a married couple making $249,000,” Furman asked.

When RealClearPolitics asked Bharat Ramamurti if forgiving a portion of the federal debt owed by law school and business school graduates was really building from “the bottom-up and middle-out,” the deputy director of the president’s National Economic Council replied, “Yeah, it is.”

“As we’ve made clear, nobody in the top 5% of incomes is going to get a single dollar under this proposal,” he said, adding that the administration had “good data” that high earners “near the top of the income cutoff are much more likely to be experiencing distress after repayment starts.”

Education Secretary Miguel Cardona insisted that the aim of Biden’s executive action was to provide pandemic relief. “Speaking to the fairness question,” he told Fox News, student debt relief was no different than pandemic small business loans. “It’s about making sure we’re taking care of Americans and investing in our economy and in our people.”

“But the people that already paid their student loans, they don’t get anything out of this deal?” asked Peter Doocy.