How Can the Constitution Be Jettisoned? 2 Writers Share Ideas in New York Times 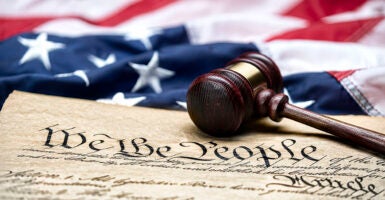 Ryan Doerfler and Samuel Moyn argued in a New York Times op-ed that the Constitution should be jettisoned as an outdated document that hampers progress. But the Constitution was meant to place checks on governmental power, thereby limiting tyranny and ensuring a benevolent government. (Photo: joebelanger/Getty Images)

On Friday, The New York Times published its latest op-ed calling for the end of the Constitution of the United States. The authors, Ryan Doerfler and Samuel Moyn, teach law at Harvard and Yale, respectively. They argue that the left’s progress has been stymied by constitutionalism itself.

“The idea of constitutionalism,” they correctly write, “is that there needs to be some higher law that is more difficult to change than the rest of the legal order. Having a constitution is about setting more sacrosanct rules than the ones the legislature can pass day to day.”

This, of course, orients the process of law toward the past: there are certain lines that simply cannot be crossed. And, as Doerfler and Moyn point out, “constitutionalism of any sort demands extraordinary consensus for meaningful progress.”

And herein lies the problem for Doerfler and Moyn: constitutions “misdirect the present into a dispute over what people agreed on once upon a time, not on what the present and future demand for and from those who live now.”

After all, they admit, “It’s difficult to find a constitutional basis for abortion or labor unions in a document written by largely affluent men more than two centuries ago. It would be far better if liberal legislators could simply make a case for abortion and labor rights on their own merits without having to bother with the Constitution.”

How can the Constitution be jettisoned? The authors suggest packing the Union with more states; “reorganizing our legislature in ways that are more fairly representative of where people actually live and vote”; turning the Senate into a legislative vestigial organ, without any actual power.

At least they’re saying the quiet part out loud.

The truth is that the Constitution is “antidemocratic,” in the sense that it sets up a series of limits on what a democratically elected government can do.

The Constitution is a charter of limited powers, delegated by the people and the states to the federal government; neither the people nor the state governments would ever have consented to the sort of pure populism promoted by Doerfler and Moyn.

The Founders deplored the idea of an unfettered federal government ruled only by popular passions. That is why they put in place a system of checks and balances to forestall mob majoritarianism. They recognized a simple truth: that the best and most responsive government presides over homogeneous interests, generally locally, and that as we abstract rule away from the people, interests diverge. This means that as government abstracts away from the people, it ought to be granted less and less power.

The left hates the Constitution for precisely that reason. To the left, the Constitution is a mere barrier against the utopian mission to restructure human relations, and ultimately, humanity itself.

In this view, large government is to be the leveling force among human beings, cramming down the views of one half of the country on the other half. Local governance is dangerous because it might lead to diversity of viewpoint and practice; federal government is the best available tool for shaping and molding. Dispense with the Constitution’s limits on the powers of the federal government, and suddenly transformational change becomes possible.

The only problem is that such a viewpoint utterly disregards the history of human relations. A government that presides over 330 million human beings with a variety of different viewpoints on core moral issues is unlikely to rule either benevolently or successfully if granted the unfettered power to flatten a multiplicity of jurisdictions and ways of life. Limits are the key to both benevolence and success in governance.

Dispensing with the Constitution may sound pleasing to those who seek drastic change on the greatest scale, but drastic change of that nature typically looks more like tyranny than progress.