Farewell to a Tireless Advocate for National Security: Peter Pry 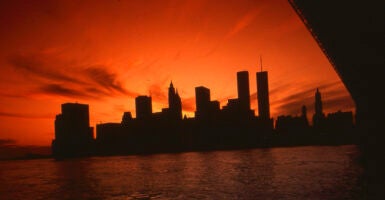 Dr. Peter Pry, who died recently, was the nation’s leading expert on the dangers of electromagnetic pulse, or EMP. He tirelessly advocated for ways America could protect itself from this potentially catastrophic national security threat. Pictured: File photo of the New York City skyline pre-2001 during a total blackout. (Photo: MartinPBGV, iStock/Getty Images)

Chances are if you one of the small number of Americans who know about the national security threat from electromagnetic pulse, you have Peter Pry, Ph.D., to thank.

Pry, who died recently at the age of 68, was the nation’s leading expert on the dangers of EMP and was a tireless advocate for methods that America could use to protect itself from this little known but potentially catastrophic danger.

An EMP—a high-intensity burst of energy caused by a rapid acceleration of charged particles from either solar weather or a nuclear bomb detonated high in the atmosphere—can cause devastating damage to the U.S. electric grid.

A high-altitude nuclear explosion above the continental United States could easily cause widespread failure of, and permanent damage to, the electric grids of entire regions of the country, grinding the U.S. economy to a halt. Subsequent deaths due to starvation or exposure could reach into the millions.

Pry saw this danger clearly and resolved to act, playing a key role in elevating knowledge about this threat.

He played a key role in running hearings in Congress that warned of the EMP threat that terrorists and rogue states could pose and in establishing the congressional EMP Commission. He helped the commission develop plans to protect the United States from EMP and worked closely with senior scientists who first discovered the nuclear EMP phenomenon.

Pry also authored numerous books on the subject, including “Civil-Military Preparedness For An Electromagnetic Pulse Catastrophe,” “War Scare: Russia and America on the Nuclear Brink,” “Nuclear Wars: Exchanges and Outcomes,” “The Strategic Nuclear Balance: And Why It Matters,” and “Israel’s Nuclear Arsenal.” Pry was also a prolific writer of magazine articles highlighting the danger of EMP (his last appearing just two months ago) and a frequent guest on television and radio.

Pry started his career in national security as a verification analyst at the U.S. Arms Control and Disarmament Agency and was responsible for assessing Soviet compliance with strategic and military arms control treaties. He followed that work by serving as an intelligence officer with the Central Intelligence Agency, where he was responsible for analyzing Soviet and Russian nuclear strategy.

Pry was troubled that the issue of EMP did not receive the appropriate amount of attention from policymakers and, indeed, the general public. He remained convinced with that with some judicious investments, Americans could be better protected from the dangers of EMP.

I did not know him well, but in 2018, when my colleague at the time, Michaela Dodge, and I wrote a paper for The Heritage Foundation on EMP, Pry was at the same grateful for our work bringing attention to the problem but was also quick to point out some points he thought we got wrong. I was incredibly impressed he took the time to let us know.

Having the courage to steadfastly advocate for a cause, even when most Americans would prefer to focus on easier issues, is a rare quality—and Pry had it in spades.