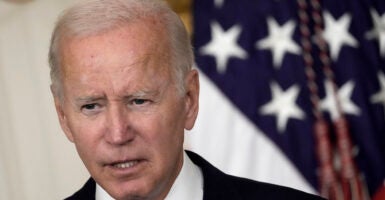 President Joe Biden is considering canceling student debt, despite economists’ warnings that this would increase inflation and subsidize the highest earners. Pictured: Biden speaks at the White House before signing the Inflation Reduction Act on Aug. 16. (Photo: Drew Angerer/Getty Images)

The Biden White House is reportedly considering “forgiving” $10,000 worth of student debt for some borrowers, a move that is likely illegal and definitely will increase inflation and force poor people to subsidize rich people.

President Joe Biden is possibly considering subsidizing Americans earning less than $150,000 or $300,000 for married couples filing jointly—households in the 96 percentile of income, e.g. the most wealthy among us. He has to make a decision by Aug. 31.

It’s clearly an election year scam, one perfectly timed to try to gin up votes for a president whose approval ratings make him toxic on the campaign trail. House Speaker Nancy Pelosi previously suggested Biden’s move would be illegal: “The president can’t do it. That’s not even a discussion,” she said last year.

It’s unlikely Pelosi will remember her warning and will probably endorse this violation of the Constitution stipulating power of the purse to Congress.

In January 2021, just before the Trump administration departed, the U.S. Department of Education issued a legal memo (which has since been ripped down by the Biden White House) stating the secretary of education “does not have the statutory authority to cancel, compromise, discharge, or forgive, on a blanket or mass basis, principal balances of student loans, and/or to materially modify the repayment amounts or terms thereof.”

The Federal Reserve Bank of New York reported in 2017 that one dollar of government student loan expansion correlates with a tuition raise of 60 cents per dollar. And what have we gotten for those pricey degrees?

Education scholar Preston Cooper at The Foundation for Research on Equal Opportunity reviewed degree earnings potential, or the “Return on Investment,” of more than 60,000 post-secondary degrees and certifications. Cooper estimates “28% of bachelor’s degrees have negative ROI, meaning the degree does not increase students’ earnings enough to justify the costs of college and the risk of dropping out.”

Who wins most under Biden’s fake magic wand? Committee for a Responsible Federal Budget reports:

The only possible voice of reason Biden might be listening to is economist Larry Summers, who rightly says that student loan cancellation “raises demand and increases inflation.” Summers impotently warned his fellow Democrats that their rash spending was spiking inflation.

Sadly, they did listen when Summers claimed the so-called Inflation Reduction Act would decrease inflation, even though multiple nonpartisan analyses show it won’t. Regardless, in this instance, we can only pray Biden will give credence to Summers’ diagnosis.