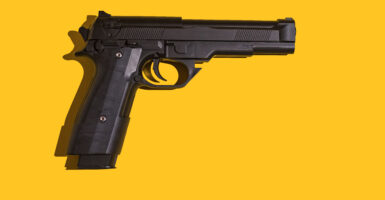 The Environmental Protection Agency and IRS are two of the government agencies with gun stockpiles. (Photo: Getty Images)

“A standing military force, with an overgrown Executive will not long be safe companions to liberty.”—James Madison

Conspiracy theories sometimes have at least a thread of truth in them, which is what makes them valid to some on the far right.

One of those theories is that the federal government is not on their side. Concern has been raised in conservative circles about the hiring of 87,000 new IRS agents as just one example. Trust in the IRS has been in decline for many years, ever since President Richard Nixon used the government as a weapon against his political enemies and Lois Lerner during the Obama administration denied tax-exempt status to many conservative political and religious organizations.

It isn’t just politics. Americans for Tax Reform, a politically conservative U.S. advocacy group based in Washington, D.C., has listed 10 examples of outrageous behavior by the IRS.

There is another reason some Americans on the right are just now becoming aware of the number of weapons associated with government entities, including some departments within the IRS.

I did not know until constitutional attorney John Whitehead, president of the Rutherford Institute, a conservative Christian public interest law firm based in Charlottesville, Virginia, sent me a list of  federal agencies that have weapons we didn’t know about, though various media have occasionally reported on the subject over the years.

Here’s the list from the Rutherford Institute that Whitehead sent me, which he says he compiled from those few media that did report on the subject:

— The IRS has stockpiled 4,500 guns and 5 million rounds of ammunition in recent years, including 621 shotguns, 539 long-barrel rifles, and 15 submachine guns. If true, an explanation is needed so that conspiracy theories don’t multiply.

— The Veterans Administration purchased 11 million rounds of ammunition (equivalent to 2,800 rounds for each of its officers), along with camouflage uniforms, riot helmets and shields, specialized image enhancement devices, and tactical lighting. That’s ironic since many veterans used weapons to defend the nation. Are they now seen as potential enemies of the government many of them fought for?

— The Department of Health and Human Services acquired 4 million rounds of ammunition, in addition to 1,300 guns, including five submachine guns and 189 automatic firearms for its Office of Inspector General.

— According to an in-depth Rutherford Institute report on “The Militarization of the U.S. Executive Agencies,” the Social Security Administration secured 800,000 rounds of ammunition for its special agents, as well as armor and guns. Seniors beware!

— The Environmental Protection Agency owns 600 guns. And the Smithsonian Institution now employs 620-armed “special agents.” You’d better not get near those dinosaurs, or litter the highway, or else.

Should we be concerned? Congress authorizes the budgets for these agencies. Have members asked their secretaries and directors why they need all this fire power? Why haven’t the broadcast networks and major newspapers conducted investigations?

A 2017 Forbes magazine article reported “The Small Business Administration (SBA) spent tens of thousands of taxpayer dollars to load its gun locker with Glocks last year. The SBA wasn’t alone – the U.S. Fish and Wildlife Service modified their Glocks with silencers.” Maybe they don’t want to disturb the fish while taking down an angler.

Freedom is not easy to obtain, but it is easy to lose. Ask those who once lived in free societies that are now ruled by one-party dictators.

The buildup of weapons, the proliferation of cameras, the increasing fear among some that our government is no longer on “our side” reminds me of the lyric from a song by The Police: “Every move you make, every breath you take I’ll be watching you.”