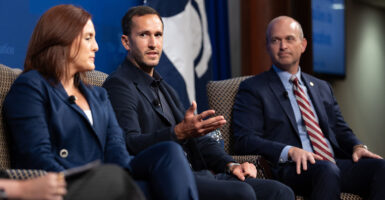 Government-assigned schools have fostered a system of resegregation, one in which students are divided “racially, socially, and economically,” says Heritage Foundation President Kevin Roberts.

Roberts contends that educational freedom is the foremost civil rights issue of the 21st century, because school choice ensures equality of opportunity, and that in turn improves public schools on every measure, he said.

“Because school choice increases transparency, it provides data in the market … that doesn’t exist now,” he said. “It breaks up the monopoly of government-funded schools.”

Roberts made his remarks at a panel discussion, “Empowering Families in Education” on Monday at Heritage, where he was joined by Tiffany Justice, co-founder of Moms for Liberty, and Corey DeAngelis, senior fellow at the American Federation for Children and executive director of the Educational Freedom Institute.

Trusting parents is central to school choice, Justice said. Schools must enable parents to make informed decisions for their children through transparent curriculums and the parent-teacher relationship, she explained.

In recent years, she said, it’s become clear that teachers unions represent “fringe, far left” interests. “What other industry would you pour money into and have the kinds of outcomes we’re having?” she said, likening it to continuing to pay a surgeon who consistently killed his patients.

The infiltration of leftist ideology in K-12 curriculums, without parents’ knowledge, is evil, Roberts said. “It’s evil because it’s dealing with our kids.”

DeAngelis noted that we should “thank teachers unions,” which he said have “inadvertently advanced the concept of school choice and homeschooling.”

Those unions lobbied the Centers for Disease Control and Prevention to keep schools closed in the face of the COVID-19 outbreak, he noted. “Two weeks to flatten the curve” turned into two years of “flattening a generation of children,” DeAngelis said, contending that self-serving teachers harmed students academically, mentally, and even physically.

Justice added that the radical gender ideology and critical race theory being taught in public schools were revealed during the pandemic. Parents were shocked to discover that their children were being taught such highly polarizing subjects, she said.

Ultimately, DeAngelis argued, those teachers “showed their true colors, and we’re all better off for it.”

Political winds are shifting, however, he continued. The governor of Arizona, for instance, signed into law an expansive school choice bill in July. Families who opt into the program receive over $6,500 per year, per child. They are free to choose their preferred schooling options—including private schools, homeschooling, and tutoring.

Roberts noted that the demographic groups most harmed by government-assigned schools also benefit the most from school choice, citing an experience he had as headmaster of the private John Paul the Great Academy Catholic high school in Lafayette, Louisiana.

A month after the school opted into then-Louisiana Gov. Bobby Jindal’s 2012 voucher program, a young black mother approached Roberts after school one day. She was able to send her son to the school because of the voucher program. That had changed the life of her seventh-grade son, her own life, and that of her family.

Freedom of education is the great equalizer, DeAngelis agreed. Nonwhite families are disproportionately more likely to use school voucher and tax credit programs, he said, adding that contrary to what critics say, that doesn’t entail a conflict between public and private schools. It’s about giving families a choice.