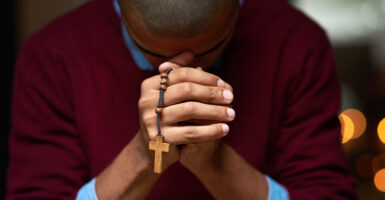 I had no idea that when I walk my dog, rosary in hand, I’m wielding an “extremist symbol.”

Yet according to a recent article in The Atlantic, I might as well be brandishing a swastika or other hateful symbol.

“The rosary has acquired a militaristic meaning for radical-traditional (or ‘rad trad’) Catholics,” writes Daniel Panneton. “On this extremist fringe, rosary beads have been woven into a conspiratorial politics and absolutist gun culture.”

Since the resulting outcry among Catholics on Twitter, The Atlantic has tried—sans any editor’s note or public acknowledgement of the changes—to soften the framing of the article, changing the headline and teaser.

But I share Compact editor Matthew Schmitz’s concern that “this article will be used to argue that Catholics peacefully praying in public—like attendees of the monthly Witness for Life in Manhattan—are violent extremists who should be restricted.”

Sure, right now pregnancy resource centers across the country—those horrible places that dare to offer diapers, health care, and financial and other support to pregnant moms—are being attacked with firebombs, but hey, let’s focus on those rosary-wielding Catholics.

Furthermore, the irony here is that if Panneton and The Atlantic’s editors do believe that fringe, militaristic figures are praying the rosary, they should welcome that. Because although The Atlantic article was extremely short on any details about the actual rosary, praying it is the opposite of an exercise in militarism.

At a minimum, any recitation of the rosary involves saying—six times!—“forgive us our trespasses as we forgive those who trespass against us,” as the “Our Father” is prayed.

Depending on the day of the week, the rosary involves meditation on various events in the lives of Jesus Christ and his mother, Mary. Those events include a pregnant Mary’s decision to rush to help her pregnant cousin; Jesus’ own birth; Jesus’ decision to turn water into wine when a wedding runs out of it; and oh yeah, Jesus peacefully allowing himself to be beaten, crowned with thorns, and crucified.

This is hardly the stuff of vive la revolution.

Furthermore, the Catholic Church understands the rosary as a prayer of peace. In 2002, Pope John Paul II wrote:

At the start of a millennium which began with the terrifying attacks of 11 September 2001, a millennium which witnesses every day innumerous parts of the world [becoming] fresh scenes of bloodshed and violence, to rediscover the Rosary means to immerse oneself in contemplation of the mystery of Christ who ‘is our peace,’ since he made ‘the two of us one, and broke down the dividing wall of hostility’ (Eph 2:14).

Consequently, one cannot recite the Rosary without feeling caught up in a clear commitment to advancing peace …

My own personal experience reflects this.

Growing up, my parents insisted, almost every day, on  praying a family rosary together, an event which I often dreaded—I had little interest in sitting quietly and thinking about Jesus. But I also noticed, in times when our family of seven strong-willed individuals was most prone to turbulence, that a strange peace would creep into our midst during the rosary. Somehow, even though no new dialogue had taken place or arguments resolved, a new understanding and equanimity would often arise during that communal prayer.

If you’re worried about violence, if you’re concerned about extremism, you should be hoping—and, dare I say, praying—that your enemies take to their knees and pray the rosary.

Because—despite all the fearmongering rhetoric of The Atlantic—spiritual combat isn’t about taking up literal arms. It’s, as you meditate on the life of Jesus, becoming gradually aware of your own sins, your own times of siding with Satan rather than Christ, and repenting. It’s praying for others who are struggling with their own temptations.

Consider the fuller context of Pope Francis’ spiritual combat quote cited by The Atlantic, part of a talk he delivered in 2020:

Conversion, changing the heart, is a process, a process that purifies us from moral encrustations. And at times it is a painful process, because there is no path of holiness without some sacrifice and without a spiritual battle. Battling for good; battling so as not to fall into temptation; doing for our part what we can, to arrive at living in the peace and joy of the Beatitudes.

Today’s Gospel passage calls into question the way of living a Christian life, which is not made up of dreams and beautiful aspirations, but of concrete commitments, in order to always open ourselves to God’s will and to love for our brothers and sisters.

“Painful process.” “Sacrifice.” “Battling so as not to fall into temptation.” “Always open ourselves to …love for our brothers and sisters.”

A traditional battle cry this ain’t.

And frankly, in the times we live, with school shooters and increased crime, with scores of Americans assaulted by addiction and mental health crises, with violations of human rights across the world, with China and Russia’s menacing behavior, I’m not sure why there’s such horror over the idea of spiritual combat.

Do we really believe—even as the wreckage of our modern times looms before our eyes—that there’s no evil in the world?

Or are we just afraid to hope there might be something we can do to combat it?

And while The Atlantic is pearl-clutching over martial language and imagery, Catholic churches across the United States are facing actual violence.

Since May of 2020, over 200 attacks have occurred against Catholic churches in the United States, according to a tracker by Catholic Vote. Nearly 70 of those attacks happened since the leaked draft of the Supreme Court’s Dobbs decision, which ultimately overturned Roe v. Wade.

Yet these facts go unmentioned by The Atlantic.

There’s plenty of things to worry about in today’s modern world. But people praying the rosary isn’t one of them—and The Atlantic should be ashamed of fearmongering about a normal Catholic practice in an era when Catholics already are targeted.