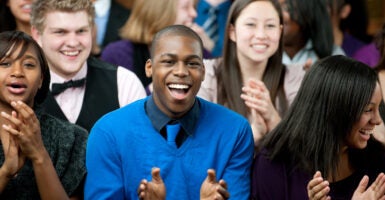 People of faith—those who are connected to a religious institution—have a greater understanding of what true community looks like than many others do. (Photo: FatCamera/Getty Images)

In the 56 years since, so-called experts have proclaimed the impending death of religion and of God in American society. Yet despite their yearly doomsday predictions for God,  he still is alive and well in America. All that has changed are the institutions he uses to bring people together.

Yes, the mainline denominations that reigned supreme for the greater part of the 20th century—Methodists, Episcopalians, Presbyterians, Lutherans—are on life support, their dwindling numbers continuing to age and relatively few new members coming aboard.

But if one looks for the reasons these denominations are dying, it is because, in many of their churches, they have replaced God with a rampant secularism that has turned these churches into little more than leftist social clubs more concerned with earthly matters rather than eternal ones.

However, it is not faith that is dying, but instead the old, mainline denominations that are left behind.

People are looking for a purpose beyond themselves. As noted recently in The Wall Street Journal, growth in religion is happening through hundreds of new denominations and new congregations as well  as other religious institutions not affiliated with Christianity.

But, as the Journal account states, it is easier to document losses than show gains. A­­nd thus the mantra of religion’s waning influence in America continues to be proclaimed.

More interesting is that numerous individuals who report no religious affiliation—and even many self-identified atheists and agnostics—show substantial levels of religious practice and belief. Thus, even among those who consider themselves “nones” (not affiliated with any religion), there is a yearning for God.

As a Christian, it is my desire to see others embrace Christianity instead of other religions. However, it is still encouraging to see a continued growth in religiosity, because religious faith is a civilizing force in what is, sadly, an increasingly uncivil society.

For instance, a Harvard School of Public Health study found that couples who regularly attend church services are 30% to 50% less likely to divorce.

Why do faith and church attendance play such a critical role? The Harvard study surmises it is because religious teachings are sacred, an important bond is created in marriage vows, and attending religious services reinforce that bond.

Religious teachings across all faiths discourage divorce and warn against adultery. They provide family support through connections with other families and, most importantly, place a strong emphasis on love and putting the needs of others above one’s own.

But for all these positive aspects of religious faith to take root, it is essential that we invite those yearning for God to join a religious community rather than living an isolated faith.

Religious institutions are one of the few remaining places where people gather to cultivate genuine relationships. People of faith—those who are connected to a religious institution—have a greater understanding of what true community looks like than many others do. That leads to stronger marriages, families, and respect for others.

This means we have a responsibility to the people in our neighborhoods, their workplaces, and their local areas to model that kind of community and care for others. As commentator Ben Shapiro, who is Jewish, has written that “we need more communal events—and that means going out of our way to engage with others.”

Thus, although it is encouraging to see that religious institutions are thriving despite the naysayers, it still is critically important for those of us who practice religious faith to do it outside our church walls as well.

That’s how we will begin to see the civil society that so many of us yearn for—a civility that comes only from those who understand that there is a higher purpose in life than just themselves.

If we live out our faith in this way, God and the institutions he uses will continue to be alive and well in America.