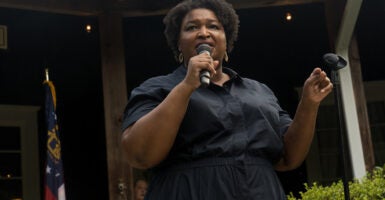 Stacey Abrams is one of many Democrats to claim she lost an election due to voter "suppression." Pictured: Georgia gubernatorial candidate Abrams speaks to supporters on July 28 in Clayton, Georgia. (Photo: Megan Varner/Getty Images)

In a recent appearance on CBS, Rep. Paul Kinzinger, R-Ill., who voted to impeach former President Donald Trump and serves on the House Jan. 6 committee, said: “The only thing we need for democracy to survive is the knowledge that you can vote, that that vote counts, and we live with the winner and loser. If half the country believes that that wasn’t accurate, you can’t expect democracy to survive.”

Where was this concern about “election deniers” when Democrats have complained about “stolen” elections?

In 2018, Democrat Stacey Abrams claimed she lost her Georgia gubernatorial race due to voter “suppression.” In her speech after the election was called for her opponent, she refused to concede. Three years later, she told CNN that her opponent “won under the rules of the game at the time, but the game was rigged against the voters of Georgia.” A USA Today fact check said: “There is little empirical evidence [opponent Georgia then-Secretary of State Brian] Kemp stole the election.”

Former Vice President Al Gore, in a Washington Post interview two years after his presidential defeat to George W. Bush, said, “I believe that if everyone in Florida who tried to vote had had his or her vote counted properly, that I would have won.”

In January 2001, several House Democrats voted against certifying the election results of 2000. Rep. Maxine Waters, D-Calif., said in a joint session of Congress: “The objection is in writing, and I do not care that it is not signed by a member of the Senate (as is necessary to force a Senate vote on the challenge).”

But Rep. Bennie Thompson, D-Miss., chairman of the Jan. 6 committee, on Jan. 6, 2005, joined 30 other House Democrats and Sen. Barbara Boxer, D-Calif., in refusing to certify Ohio’s presidential election results, claiming “voter suppression” in addition to arguing, also with no basis in fact, that the Diebold voting machines were manipulated to reelect Bush. The Senate voted 74-1 against the Democrats’ challenge.

Though Sen. Dick Durbin, D-Ill., voted against the challenge, he praised Boxer in 2005 for making it: “I thank her for doing that, because it gives members an opportunity once again on a bipartisan basis to look at a challenge that we face not just in the last election in one state, but in many states.”

Hillary Clinton consistently calls the presidential election of 2016 “stolen” and described then-President Trump as “illegitimate.” Former President Jimmy Carter said in 2019: “I think a full investigation would show that Trump didn’t actually win the election in 2016. He lost the election, and he was put into office because the Russians interfered on his behalf.” New York Attorney General Letitia James said she “will never be afraid to challenge this illegitimate president.”

About the 2016 election, former Obama Secretary of Homeland Security Jeh Johnson testified under oath that, while the Russians tried to manipulate voting machines, there is no evidence that a single vote tally was changed. As to the effect of Russian interference, Johnson said that there’s no way of knowing whether the interference affected public opinion or the election result.