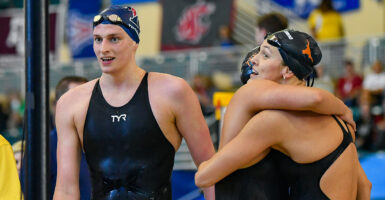 Protesters rallied in the nation’s capital Thursday to challenge the Biden administration’s proposed new rules for enforcing Title IX’s anti-discrimination provisions that would change the definition of “sex” to include “gender identity.”

A legal advocacy group called Stop Abusive and Violent Environments organized the rally at the Eisenhower Memorial on the 50th anniversary of the passage of Title IX. Congress originally designed the civil rights law to bar sex-based discrimination in “any education program or activity receiving federal financial assistance.”

The regulatory change proposed by the Biden administration would sacrifice women’s hard-fought gains on the altar of the left’s agenda, Heritage Foundation legal scholar Sarah Parshall Perry, one of 20 speakers at the rally, said. (The Daily Signal is Heritage’s multimedia news organization.)

This revised meaning of “sex” to include men who identify as women and women who identify as men would apply to extracurricular and athletic programs at all schools and universities that hope to continue to receive federal funds.

Perry noted that Congress, when first drafting Title IX, chose not to include language referring to gender identity. And lawmakers haven’t done so in the 50 years since, she said.

The Biden administration’s revisions to the rules would “force an interpretation of this longstanding law” that is at odds with the intentions of Congress and the plain language of Title IX, Perry said.

Elizabeth Tew, communications director for the Independent Women’s Forum, told the crowd of about 30 protesters that the Biden administration rules clearly target girls and women’s sports.

“Male-bodied athletes,” as Tew called them, would rob girls and women of fair competition.

“Women fought hard for [the] equal protections of Title IX,” Tew said. “This is not inclusion—this is misogyny.”

Tew and Perry both pointed to Lia Thomas, the biological male who has competed as a female swimmer since 2021. In March, Thomas defeated women to win the NCAA Women’s Swimming Championship.

In its radical new interpretation of Title IX, Perry said, the Department of Education has “ensured that women must give up their spots on teams, in competitions, at championships, and on the podium.”

Like Thomas before them, other biological males competing in certain women’s sports will continue to rob female athletes of the honors and awards they have earned, she said.

The Biden administration’s rules change on Title IX, she warned, “eviscerates everything our mothers and grandmothers worked to achieve.”