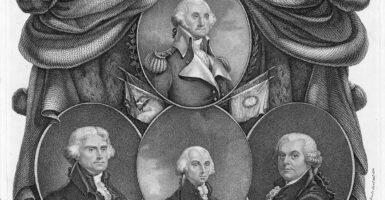 After assessing what the public learns in visiting the homes of Jefferson and Madison, Heritage Foundation scholar Brenda Hafera concludes that both Monticello and Montpelier "fall short" because they "devote little time to Jefferson’s and Madison’s achievements.” Pictured: An engraving includes portraits of the first four presidents: George Washington, John Adams, Thomas Jefferson, and James Madison. (Photo: Smith Collection/Gado/Getty Images)

For decades, schoolchildren across America have taken field trips to presidential homes such as George Washington’s Mount Vernon, Thomas Jefferson’s Monticello, and James Madison’s Montpelier. Students and adults alike have learned about the lives and legacies of the men who crafted our founding documents and stood for freedom at the risk of their own lives.

But today, visitors to Monticello and Montpelier will discover that a new narrative has seeped into the grounds of these historic sites in Virginia.

Although Mount Vernon remains the “gold standard” for educational accuracy, Monticello and Montpelier “fall short, as they devote little time to Jefferson’s and Madison’s achievements,” according to Brenda Hafera, a senior policy analyst and deputy director of The Heritage Foundation’s B. Kenneth Simon Center for American Studies. (The Daily Signal is Heritage’s multimedia news organization.)

Both Monticello and Montpelier have adopted woke ideology, focusing on the Founding Fathers’ ownership of slaves and other shortcomings, Hafera says, “without also providing an adequate account of their contributions.”

Hafera, author of a new Heritage report on the three presidential homes, joins the “Problematic Women” podcast to discuss the importance of recognizing and celebrating all that the Founders did, while not ignoring their shortcomings.

Also on today’s show, we discuss the tragic story of a mother who lost custody of her daughter because she insists that her daughter is a girl. Plus, Senate Democrats just passed a major tax and spending bill by a wafer-thin margin. We tell you what you need to know. And as always, we’ll crown our “Problematic Woman of the Week.”