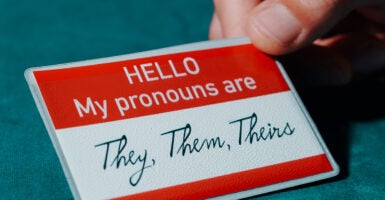 A “Student Identification Card” sounds relatively innocuous, like something that could come in handy for a field trip, emergency drill, or cafeteria hour. Such a card seems unlikely to serve a purpose in promoting LGBT indoctrination and deceiving parents. And yet, that’s exactly what it is now being used for.

This particular student ID card is available from sharemylesson.com, a “community-based site” that is “created and maintained by the American Federation of Teachers”. The resource appears to be developed by the site’s “Identity Affirming Classroom Team” and is classified as “social emotional learning.” According to Share My Lesson, this card is a resource recommended for all grade levels.

The card provides students a space to write their “Government Name” and then a space for the “Name you would like to be called in class.” Below that is a space for any pronunciation tips. If the card stopped there, it might not be so bad.

“Government Name” is a bit of an odd choice, compared to “full name” or “given name,” but it still describes what should be written in the blank. The next blank could help teachers remember widely used nicknames (such as Katie instead of Katherine or Jack instead of John), students who go by their middle names, or students who select English names instead of hard-to-pronounce foreign ones. Pronunciation tips could also help with names with unusual or ambiguous spellings, particularly foreign ones.

But that’s where the card gets weird. “Can I call you this name outside of class?” it asks, giving the student the options to indicate “Yes” or “No.” That’s a strangely irrelevant question to squeeze onto a small ID card.

If that’s the name the student goes by, then what does it matter where they are? Do students use special names in class that they don’t use elsewhere—around their family, for example? Is the name a student uses in class a secret from that student’s family? Who cares if Johnny’s family knows he prefers to go by “Jack”?

Of course, if Johnny preferred to go by “Suzie,” then the change of name would carry much greater significance. A rose by any other name might smell as sweet, but a person’s name communicates much more about his or her identity.

Not least of the important characteristics communicated by a name (in most instances—apologies to the Jordans, Taylors, and Rileys of the world) is the person’s sex, which, for all of human history, has bifurcated mankind into two distinct but complementary groups.

That distinction between the sexes is clear in pronouns, too. Yet the card goes on to provide space for the student’s pronouns (a simple circle around M or F should have sufficed), and it cites as just “some examples: he/him, they/them, she/her.”

The pronoun section of the card occupies as much space as the name section and includes even more qualifications on their use. In fact, due to its prominence, this ID card may as well be called a “pronoun card.” The student can indicate “Yes” or “No” to these questions:

For students who identity by standard pronouns or as standard genders, these questions are beyond unnecessary—they’re ridiculous. These options, then, are only included on the card to accommodate the students embracing gender identities other than their biological sex.

Their inclusion is designed to encourage these students by allowing them to experiment in private, with a teacher as their sole counselor. They don’t have to “out” themselves to their class, to other teachers, or even to their parents if they don’t want to. The natural timidity they feel—which is their conscience warning them against defying nature—is simply sidestepped.

These questions offer students one of temptation’s classic lies: You can get all the benefits of sin’s pleasure and avoid all of sin’s consequences. But sin should come with the warning label: “I am Folly; I will always betray you and enslave you” (Proverbs 9:13-18).

Unfortunately, most school-age children haven’t lived long enough to see through the lie; that’s why God gave them parents to guide them. And that’s why their tempters and temptresses work so hard to exclude parental advice from their deceitful schemes.

The pronoun card contains one more section, pinched into the bottom 10th of the card’s face, almost as an afterthought. “Tell me three other things about yourself. This could be interesting facts, hobbies, things you want me to know about…” A child must be very succinct indeed to fit three statements into the tiny space provided.

The layout makes it clear: The pronouns a child chooses, and who may know about them, are far more important for a teacher to know than whether a child likes to draw, or wants a pony, or plays soccer, or has an allergy, or is a good juggler. Even if the ideal of teacher-student interaction were to maximize student affirmation (which it shouldn’t be), such information would be far more relevant for a teacher to know than a child’s gender identity.

If it were possible to make the pronoun card’s sinister purposes any clearer, the back of the card does just that. “So why are some educators having trouble with acknowledging students’ pronouns?” it asks. “Part of the answer is that we are often missing key information and qualitative data about what a pronoun is, why it’s important, and the impact of not acknowledging it.”

Part of the answer, which they apparently overlook, is that the made-up rules about when and where to use a student’s made-up pronouns and made-up name, and when to pretend like everything is normal, are way too difficult for anyone to remember.

The card further states that, “for queer, nonconforming, nonbinary, and transgender people, these pronouns [he/she] may not fit, can create discomfort, and can cause stress and anxiety.”

So, what happens when a student’s self-perceived gender identity changes—as happens often? What if, suddenly, the student determines that the pronouns marked on his or her pronoun card now cause discomfort, stress, and anxiety? Perhaps they could get a new card, or only fill out the card in pencil. But what use is an ID card filled out in pencil? Even more perplexing, should the teacher check every student’s card daily to make sure nothing has changed? It’s not hard to see this scheme resulting in bad outcomes.

So, why did someone the American Federation of Teachers saw fit to promote create this card in the first place? The answer lies right in the center of the card. In between a student’s “government name” and one line of “tell me … about yourself” (paper-thin disguises both) is an elaborate system for students and teachers to secretly communicate about their gender identity, right under their parents’ nose.

The assumption is that students should suspect their parents, hide secrets from them, and do so in secret code. This isolates students from those who love them most, and compels them to emotionally rely upon, and open up about their sexual identity to, one adult only, an adult to whom they are not related.

Oh, I guess that code is not at all secret, but neither is theirs.