I Lost a Child to Miscarriage. New York Times Essay Likening Miscarriage to Abortion Is Despicable. 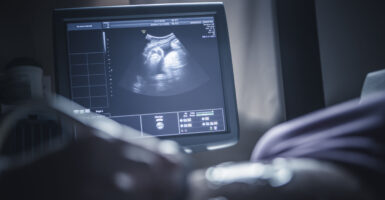 Pro-abortion advocates are trying to muddy the definition of an abortion with muddy and obtuse moral reasoning.

Their aim is clear: to make abortion less morally objectionable by pretending it’s akin to miscarriage, which elicits sympathy. This kind of acquittal by association requires the worst kind of revisionist history, and as the Roe v. Wade court did in 1973, Donley and Lens construct a fake version of America’s “acceptance”—even respect—for abortion, while urging the rest of us to fully abandon sound judgment and common sense.

The authors argue that the line between abortion and pregnancy loss “has always been blurry,” and that the two experiences are “more alike than people think.” They note that the drugs and procedures used in abortions can be utilized after a miscarriage. They claim the “stigma and isolation,” as well as the prevalence is similar for both.

They also cite social mores surrounding pregnancy at the time of the 14th Amendment’s adoption. It’s an era likewise analyzed by the Supreme Court in Dobbs v. Jackson Women’s Health Organization to determine that abortion was not, in fact, rooted in the nation’s history and tradition nor was it an essential component of ordered liberty before finally doing away with Roe v. Wade.

But in analyzing that history, the authors reach a different conclusion, saying there was “little moral blame” placed on women who took steps to end a pregnancy.

“To the contrary,” they argue, “doing so was a respected method of spacing out pregnancies so that a mother could take care of her children.”

To call abortion a “respected” method of birth control is specious at best and engages in the kind of historical fiction Justice Harry Blackmun relied upon to justify Roe from the start. What’s more, they cite for this proposition a book on the history of miscarriage—not abortion—in America.

These faulty premises assume we cannot tell the difference between an intentional ending of an unborn life, and the spontaneous loss of an unborn child. They also assume we do not know we are being lied to when we are told abortion was a common and respected birth control method in early America.

That key, they claim, is to recognize “subjective, relational fetal value,” which empowers abortion advocates to terminate their unwanted pregnancies and still give those who grieve a miscarriage a shoulder to cry on while their ideological commitments remain fully intact.

This kind of moral equivalence is despicable—and denigrates those who have lost an unborn child to miscarriage.

In their forthcoming law review article, the authors take their cue from the realm of tort law, examining jury awards for wrongful death or negligence claims when a defendant’s conduct causes a loss of pregnancy.

Like calloused actuaries, Donley and Lens argue that the “subjective and variable loss suffered in pregnancy loss is at the center of every tort claim where the plaintiff alleges that defendant’s tortious conduct caused the miscarriage or stillbirth. Even though pregnancy loss researchers stress that the extent of the loss after miscarriage and stillbirth ‘is not truly measurable,’ tort law requires a jury to do so.”

The authors use this principle in their associated essay to conclude that this subjectivity is fundamentally at odds with the pro-life notion of “equat[ing] a fertilized egg with a breathing baby from the moment of conception for every pregnancy” and if we “ground fetal value in the pregnant woman’s attachment and commit to defending her conception of the pregnancy, we can recognize loss without threatening abortion rights.”

How attached was the mother to the pregnancy? What did she believe about it? How great is her suffering? A fetus is a child if you want the pregnancy. It isn’t if you don’t.

They accuse the “anti-abortion movement [of] realiz[ing] that it could weaponize grief after pregnancy loss to suggest the callousness of abortion and to promote the concept of fetal personhood.” Grief doesn’t need to be weaponized. It’s powerful enough.

After two reassuring ultrasounds showing a normally developing baby roughly the size of a prune with a strong and steady heartbeat, I woke up one morning bleeding and in excruciating pain. Because I didn’t miscarry completely, I required a procedure called a dilation and curettage—the one and only similarity between my miscarriage and an abortion. The minute my eyes opened in the surgical recovery room, I burst into sobs. Even now, 14 years hence, I feel that loss.

In their law review article, Donley and Lens aver that “every person’s loss will be valued differently based on their individual relationship with the potential child.” They approximate miscarriage to a kind of loss that can be valued by a jury, involving some monetary calculation of the kind required for damages awards in tort cases—as though this allows them a way to acknowledge the miscarriage in concrete terms—without acknowledging the underlying humanity of the lost child.

This is sloppy legal analysis and even sloppier moral reasoning. My loss was not “subjective” or conceptual. Mothers are not capable of relationships with “potential” children. To argue otherwise is a flight of fancy, and a pernicious one at that. My loss was objective. It had a heartbeat.

This isn’t the first time liberal scholars have employed a line of creative—albeit shoddy—logic to support a right to kill an unborn child. Roe v. Wade proved it. But properly interpreting and applying the Constitution as the Supreme Court did in Dobbs should be non-fiction.

Donley and Lens have simply engaged in yet another fantastic and heretical exercise on their way to arguing for abortion on demand. Real intellectual courage requires a defense of the right to kill an unborn child on its own merits alone. Tragically, the thin veneer of law and history the authors use to camouflage abortion’s horror diminishes the significance of any category of pregnancy loss, including mine.

Donley and Lens reach a range of shockingly defective conclusions in an effort to liken abortion to miscarriage, thinking that in this way, they’ve cleverly avoided the personhood question. But their essay does hold one kernel of truth:

The abortion-rights movement has at times widened the divide between abortion and pregnancy loss by minimizing focus on the fetus, to ensure that the pregnant person’s interest can never be outweighed. That has allowed many in the movement to avoid the difficult question that pregnancy loss raises: What was lost?

What, indeed. For women like me who’ve lost a child to miscarriage, the answer is abundantly clear.