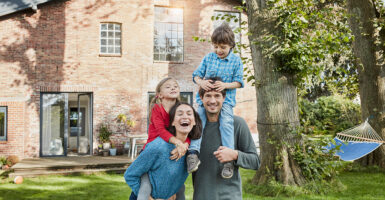 Ten percent of the households in this country at the end of 2019—just before the COVID-19 pandemic hit—had a net wealth of more than $1.3 million, according to a report published last month by the Census Bureau.

There were also definite patterns among households that had higher wealth and those that had less.

In fact, traditional American values and achieving the American financial dream appear to be linked.

Specifically, people who study, work, marry, buy a home, and live past retirement age tend to be wealthier than people who do not.

The data to back this up comes from the Survey of Income and Program Participation that the Census Bureau conducted in 2020. The bureau’s report—“The Wealth of Households: 2019”—defines “wealth” simply as “the value of assets owned minus the debts owed.”

“Therefore,” the report notes, “wealth can be negative.”

What pushes someone toward the top—or the bottom?

When it comes to education, the higher the degree someone attains, the more likely they are to be among the wealthier class.

In households where the best-educated person had earned a graduate or professional degree, it was $408,700.

Americans who have finished school and want to accumulate wealth face an obvious path: work.

Among households collecting food stamps, the median wealth was $2,000.

Households headed by people who got married and stayed married were wealthier than households where the people did not.

Was this merely because married-couple households had more people or workers? No.

Wealth can be derived not only by someone owning their own home but by owning other people’s homes.

However, while 61.3% of households have equity in their own home and 58.8% have retirement accounts, only 7.2% own rental property and only 8.7% own other real estate.

The lesson: America remains a land of opportunity for people who study, work, save, invest, and stand by their families.