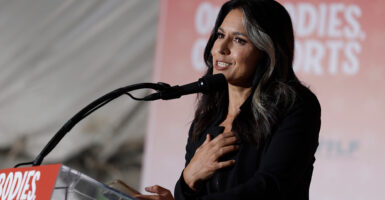 Former U.S. Rep. Tulsi Gabbard appeared on Fox News and cited multiple controversial investigations, allegations, and abuses of power within the FBI and other government agencies. Pictured: Gabbard speaks at an “Our Bodies, Our Sports” rally to mark the 50th anniversary of Title IX on June 23 in Washington, D.C. (Photo: Anna Moneymaker/Getty Images)

Former Democratic Rep. Tulsi Gabbard of Hawaii criticized the Department of Justice, calling the Monday raid on Mar-a-Lago a “blatant abuse of power” during a Tuesday evening Fox News appearance.

“This raid is just the latest serious escalation of this disturbing trend that we have seen of blatant abuse of power by those in power to not only protect their friends but to target their political opponents, or frankly, anyone who dares to dissent or challenge or disagree or even question what this administration is doing,” Gabbard, a former presidential candidate, said about the raid.

Gabbard cited multiple controversial investigations and allegations of abuses, some of which predated the Trump administration.

“Look to the FBI investigation of the—of Trump for the Russia hoax that didn’t turn out to be anything,” she said. “You look at the IRS and Lois Lerner directly targeting conservative organizations under the Obama administration. You look at this administration’s Department of Homeland Security’s creation of a ministry of truth to go after us, everyday Americans across the country, tell us, ‘Hey, here is what we say the truth is and is not and what you are allowed to say and what you are not allowed to say.’ It’s hard to imagine, given how blatant all of this is, that this is happening in the United States of America.”

The Federal Bureau of Investigation raided Mar-a-Lago Monday in the wake of an investigation into allegations involving classified documents, according to The New York Times.

“These things are what happened in banana republics or dictators have federal agencies, including law enforcement, to act as their own personal goon squads and that’s what I’m thinking of as I see this escalating, very dangerous trend and abuse of power by this administration,” Gabbard said.

The Justice Department did not immediately respond to a request for comment from the Daily Caller News Foundation.