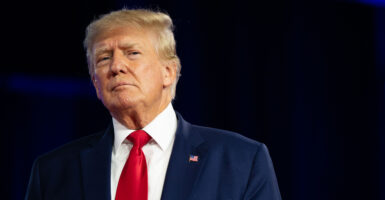 "Such an assault could only take place in broken, third-world countries. Sadly, America has now become one of those countries, corrupt at a level not seen before," says former President Donald Trump, pictured at the Conservative Political Action Conference Aug. 6 in Dallas, Texas (Photo: Brandon Bell/Getty Images)

Former President Donald Trump said Monday evening his home had been raided by a “large group of FBI agents.”

“Nothing like this has ever happened to a president of the United States before,” Trump said in a statement. “After working and cooperating with the relevant government agencies, this unannounced raid on my home was not necessary or appropriate.”

Trump’s estate, Mar-a-Lago, is located in Palm Beach, Florida. Florida’s governor, Republican Ron DeSantis, tweeted that the raid was an “another escalation in the weaponization of federal agencies against the Regime’s political opponents, while people like Hunter Biden get treated with kid gloves.”

“Such an assault could only take place in broken, third-world countries,” Trump added. “Sadly, America has now become one of those countries, corrupt at a level not seen before. They even broke into my safe! What is the difference between this and Watergate, where operatives broke into the Democrat National Committee?”

The New York Times, citing unnamed sources, reported that the raid was done because of concerns Trump had classified material at his home. Trump reportedly had brought boxes to Mar-a-Lago containing “many pages of classified documents, according to a person familiar with their contents.”

In his statement, the former president argued that his 2016 political rival, former Secretary of State Hillary Clinton, had been treated differently. “Hillary Clinton was allowed to delete and acid wash 33,000 e-mails AFTER they were subpoenaed by Congress,” Trump said. “Absolutely nothing has happened to hold her accountable.”

In a 2016 debate with Trump, Clinton said the deleted emails “were personal emails and not official.”

Kevin McCarthy, the top House Republican, said in a statement that the Justice Department had “reached an intolerable state of weaponized politicization.”

The California Republican added, “When Republicans take back the House, we will conduct immediate oversight of this department, follow the facts and leave no stone unturned.”

“The raid on Mar-a-Lago represents yet another example of the federal government weaponizing law enforcement to punish political enemies, silence critics, and send a message to those whom it views as enemies,” Heritage Foundation president Kevin Roberts said in a statement. (The Daily Signal is the news outlet of The Heritage Foundation.) “The Biden administration and the D.C. swamp are making it very clear that they will use all the power of the state to intimidate anyone who stands in their way.”

“If they think they can treat a former president this way, imagine what they think they can do to the average American,” Roberts added. “Such actions could only be justified based on overwhelming evidence of wrongdoing. The FBI needs to immediately explain its reckless actions and [President Joe] Biden needs to answer the question of whether he ordered this raid.”