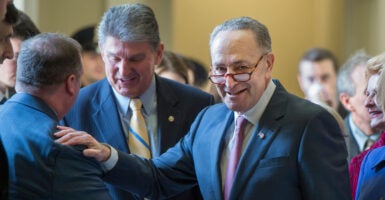 Their 725-page monstrosity belies its billing, beginning with its fraudulent title. While Americans reel under 9.1% year-over-year inflation, the Inflation Reduction Act neglects the worst price surge since November 1981.

The Penn Wharton Budget Model politely mocks its Democratic inflation-reduction claims. “The Act would very slightly increase inflation until 2024 and decrease inflation thereafter,” University of Pennsylvania economists reckon. “These point estimates are statistically indistinguishable from zero, thereby indicating low confidence that the legislation will have any impact on inflation.”

The Inflation Reduction Act would fight inflation through higher government spending. That’s like battling alcoholism with just one more round of drinks.

According to the Committee for a Responsible Federal Budget, the Inflation Reduction Act would pour $485 billion of high-octane moonshine atop today’s inflationary inferno. That includes:

The Inflation Reduction Act also raises taxes by $470 billion, including $213 billion in corporate levies. This is dumb in boom times but idiotic in a recession, in which America is mired after two consecutive quarters of economic contraction, Team Biden’s contradictory linguistic gymnastics notwithstanding.

—A boost in taxes on crude oil and imported petroleum.

The Inflation Reduction Act also would break President Joe Biden’s solemn pledge not to raise taxes on those earning under $400,000 annually.

The Congressional Joint Economic Committee calculates that Americans earning $200,000 or less would pay at least $30.2 billion in new taxes through 2031—$16.7 billion next year. Those making less than $10,000 can savor an aggregated $323 million tax hike starting in 2023.

Using the Tax Foundation’s General Equilibrium Model, we estimate that the Inflation Reduction Act would reduce long-run economic output by about 0.1 percent and eliminate about 30,000 full-time equivalent jobs in the United States. It would also reduce average after-tax incomes for taxpayers across every income quintile over the long run.

The foundation added: “By reducing long-run economic growth, this bill may actually worsen inflation by constraining the productive capacity of the economy.”

The Inflation Reduction Act also would pump $124 billion into tax enforcement, including $80 billion to double the Internal Revenue Service’s headcount. The IRS last year answered just 10% of its phone calls. Largely ignoring this mess, some 87,000 new inspectors instead would investigate, audit, and litigate the returns of not just Elon Musk and Mark Zuckerberg, but you and yours.

Why? Because that’s where the money is.

The bill would empower Medicare to dictate drug prices. Impertinent pharmaceutical companies could charge more, but that would trigger a tax of up to 95%. This would strangle lifesaving innovation.

Consequently, Philipson writes in Newsweek, “Over the next 17 years, the bill would reduce drug industry research and development by about $663 billion, resulting in 135 fewer new medicines. This will amount to a loss of 330 million life-years, about 30 times the loss from COVID-19 so far.”

It’s a long shot, but conservatives should do what we can to deflate the Inflation Reduction Act, no matter what Sen. Kyrsten Sinema, D-Ariz., does.

When America goes full commie, and we get shipped to the reeducation camps, at least we can tell people that we tried to stop this from happening.