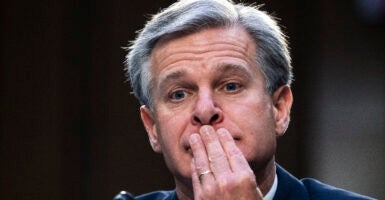 The FBI is damaging its credibility with the American people.

The latest revelations from Sen. Chuck Grassley, R-Iowa, about the political partisans who occupy the ranks of the most powerful law enforcement agency in the country are, if true, deeply disturbing.

The trust the FBI once enjoyed, and which it needs if it is to function as an effective law enforcement agency, has been greatly diminished over the last several years. This new scandal certainly doesn’t help to restore that trust.

The revelations involve two hot-button topics: the investigation into the president’s son Hunter Biden and the 2020 election.

According to two recent letters Grassley sent to Attorney General Merrick Garland and FBI Director Chris Wray, FBI whistleblowers have informed him that the FBI “developed information about Hunter Biden’s criminal financial and related activity” in 2020 (when it could have affected the outcome of the election).

After that, FBI supervisory intelligence analyst Brian Auten prepared an assessment in August 2020 that was used by others at the FBI “to improperly discredit negative Hunter Biden information as disinformation” so that the investigation of Hunter Biden would be stopped.

According to Grassley’s July 25 letter, “verified and verifiable derogatory information on Hunter Biden was falsely labeled as disinformation” by Auten.

Grassley alleges that this appears to have been part of “a scheme in place among certain FBI officials to undermine derogatory information connected to Hunter Biden.” Those same officials, say the whistleblowers, placed that disinformation finding in a restricted file so others within the FBI could not review it or evaluate how the assessment had been made.

Auten is the same FBI intelligence analyst who has been identified as the analyst referred to in a December 2019 report by the Justice Department’s inspector general who “failed to advise” others at the FBI in 2016 “about inconsistencies in the Steele dossier,” the phony report about Trump-Russian collusion created by Fusion GPS.

That report revealed “serious performance failures” and detailed numerous mistakes, errors, and omissions by FBI personnel in what was codenamed Operation Crossfire Hurricane.

As former Attorney General William Barr said, FBI agents and officials “misled the FISA court, omitted critical exculpatory facts from their filings, and suppressed or ignored information negating the reliability of their principal source.” The FBI’s actions reflected “a clear abuse of the FISA process,” according to Barr.

If the whistleblowers’ allegations are true, this means that Auten worked to instigate a counterintelligence investigation against then-Republican presidential nominee Donald Trump prior to the 2016 election, while in 2020 he tried to stop a criminal investigation of Hunter Biden before the November presidential election in which his father was the Democratic nominee running against Trump.

Grassley further alleges in his July 25 letter that the assistant special agent in charge of the Washington Field Office, Timothy Thibault, tried to quash any investigation of Hunter Biden by ordering the matter closed “without providing a valid reason as required by FBI guidelines.”

The whistleblowers claim that Thibault “attempted to improperly mark the matter in FBI systems so that it could not be opened in the future,” Grassley says.

The whistleblowers also told Grassley, according to his July 18 letter, that Thibault routinely “opened or approved, investigations based on unsubstantiated or unverified statements sourced to biased media publications.” But in other instances, he “declined to open or approve investigations based on partisan objectives, notwithstanding the existence of proper predication.”

As Grassley said in a May 31 letter, those social media posts and other disturbing information related by the whistleblowers raised serious ethical concerns and “call[ed] into question ASAC Thibault’s ability to perform the duties and responsibilities of an FBI agent objectively and without bias.”

Grassley says that Thibault, “while overseeing and directing the FBI’s most significant Federal public corruption investigation, traveled to the Czech Republic” to attend a seminar with Nellie Ohr, an employee of Fusion GPS.

Fusion GPS is the consulting firm that “created anti-Trump propaganda for use by the Hillary Clinton Campaign and Democratic National Committee and was involved in the fake Alfa bank narrative.”

But it gets worse. Richard Pilger serves as the head of the Election Crimes Branch of the Public Integrity Section at the Justice Department. As former DOJ lawyer J. Christian Adams explained, Pilger “blocked numerous election crime investigations” and “was lionized on MSNBC“ for his opposition to investigating election fraud.

Grassley even issued a report in 2021 as part of the oversight work done by the Senate Judiciary Committee that had an entire section devoted to Pilger’s apparent misconduct based on testimony from senior Justice Department employees.

According to Grassley’s July 18 letter, Pilger and Thibault were the individuals “deeply involved in the decision to open and pursue” the Justice Department’s investigation of Trump’s campaign, its advisers, and “individuals linked to electors during the 2020 election.”

And what is that investigation based on? According to Grassley, the whistleblowers told him that this investigation was initiated in substantial part on “January 2020 CNN news articles which relied on information derived from a liberal non-profit” organization.

The whistleblowers also claim, Grassley says, that the memos reviewed by the attorney general and the FBI director to approve the opening of this investigation “included selective assertions created in large part by Thibault and either removed or watered-down material connected” to left-wing entities.

Grassley concludes his July 18 letter by voicing the concern all of us should have: “that political bias by a select group of Justice Department and FBI officials has infected the Justice Department’s and FBI’s usual process and procedure to open and pursue high-profile and politically charged investigations.”

The Iowa Republican goes on to say that if “these allegations are true and accurate, the Justice Department and FBI are—and have been—institutionally corrupted to their very core to the point in which the United States Congress and the American people will have no confidence in the equal application of the law.”

If they have not already done so, Wray and Garland should take immediate steps to investigate and address these allegations, as should the Justice Department’s inspector general, Michael Horowitz.

Although many rank-and-file FBI agents and Justice Department employees seek to honorably serve our country, there is nothing more dangerous than a law enforcement agency that makes decisions based on political partisanship rather than faithfully and impartially enforcing the law.