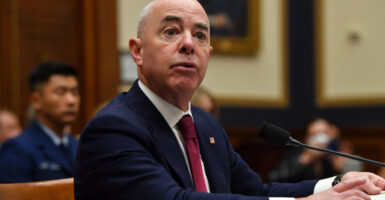 The Heritage Foundation filed a lawsuit Wednesday against the Department of Homeland Security, seeking the names of those the Biden administration consulted in deciding to limit immigration enforcement, according to a copy of the lawsuit obtained exclusively by the Daily Caller News Foundation.

The lawsuit follows a Freedom of Information Act request in January in which the think tank’s Oversight Project sought relevant information about stakeholders involved in the administration’s decision and any communications they may have had with Homeland Security Secretary Alejandro Mayorkas. In the lawsuit, Heritage argues that DHS failed to comply with “statutory timelines” in providing the requested information.

“Unfortunately, Secretary Mayorkas has conspired with open-borders advocates within the Biden administration, as well as radical groups in the private sector, to open the border and severely limit ICE agents’ ability to do their job,” said Tom Homan, a visiting fellow at Heritage who headed Immigration and Customs Enforcement during the Trump administration. [The Daily Signal is Heritage’s multimedia news organization.]

He has effectively abolished ICE, and that’s why we just saw the lowest deportation number in ICE’s history, and more than 14,000 criminal illegal aliens released into our communities. This lawsuit will hopefully shine a light on how we got here, and who else is responsible.

“Due to limited resources, DHS cannot respond to all immigration violations or remove all persons unlawfully in the United States,” the Pekoske memo stated. “Rather, DHS must implement civil immigration enforcement based on sensible priorities and changing circumstances.”

The state of Texas sued the Biden administration over the order, resulting in a temporary restraining order and subsequent ban being granted by a federal judge.

The acting ICE director at the time, Tae Johnson, issued a memo on Feb. 18, 2021, which set new priorities for civil immigration enforcement and deportations for all agency employees.

Mayorkas issued a memo Sept. 30 “to better focus the Department’s resources on the apprehension and removal of noncitizens who are a threat to our national security, public safety, and border security and advance the interests of justice by ensuring a case-by-case assessment of whether an individual poses a threat.”