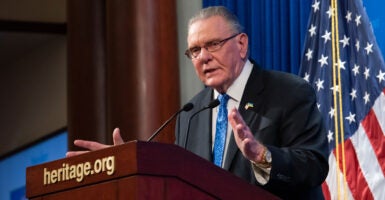 China's aggression over the past decade under President Xi Jinping "has been the most pronounced as it pertains to Taiwan," retired U.S. Army Gen. Jack Keane said Thursday at a Heritage Foundation event on "The Future of Taiwan Arms Sales." (Photo: Erin Granzow for The Heritage Foundation)

Military analyst and retired Army Gen. Jack Keane warned Thursday that China poses real danger to the United States, Taiwan, and the rest of the world as it aggressively and unrelentingly seeks “regional and global domination.”

Keane singled out Chinese President Xi Jinping in his remarks.

[Xi] has increased repression at home and increased aggression abroad. He’s seeking regional and global domination, and he wants to upend the United States’ power domination in the world today.  … The [People’s Republic of China’s] aggression in the last 10 years under President Xi has been the most pronounced as it pertains to Taiwan, and it is increasing every single year, undermining their civil society and their democracy.

“This would be a challenge for the United States. The loss of personnel and high capital assets would be on a scale we have not seen since World War II,” Keane warned, noting he has “played multiple war games on this scenario.”

Following Keane’s remarks, a panel featuring Dean Cheng, a senior research fellow in the Asian Studies Center at The Heritage Foundation, and Lara Crouch, a senior staff member of the Senate Foreign Relations Committee, discussed the future of arms sales to Taiwan. The discussion was moderated by Rupert Hammond-Chambers, president of the U.S.-Taiwan Business Council.

Crouch outlined lessons learned by the United States from the Russian invasion of Ukraine that could be helpful for security assistance to Taiwan.

“The first thing is on the training side, where you can really see that the investment that we made in training the Ukrainians for the last eight years has really paid off,” said Crouch, a staffer for Sen. James Risch, R-Idaho. “We started doing that, obviously, we did it after what happened in 2014. But still, we did it earlier, rather than later, and built that up over time.”

Russia annexed the Crimean Peninsula from Ukraine in 2014.

Risch, ranking member of the Senate Foreign Relations Committee, last year introduced the Taiwan Deterrence Act, designed to “advance a policy to ensure peace and security across the Taiwan Strait.”

We have a very flexible, open policy when it comes to engaging with Taiwan under the Taiwan Relations Act. The entire ‘One China’ policy that we have is premised on the idea that Beijing would also be committed to peace and stability across the [Taiwan] Strait, and that is also very evident in the declassified note that President [Ronald] Reagan signed in 1982 about how there must be a permanent linkage between U.S. policy on arms sales to Taiwan and the degree to which the threat from Beijing either increases or decreases.

Cheng, whose research at Heritage focuses on China’s military and foreign policy, discussed how he thinks Taiwan’s Ministry of Defense has been “absorbing” China’s increasingly aggressive tactics.

“I think the fact that there are missiles flying over the island is going to generate what is sometimes termed ‘pucker factor.’ One, because of the possibility of accident; but two, because it is a statement by the Chinese of how they view Taiwan,” Cheng said, noting the Chinese think they can fire missiles over the island without risk of retribution.

“I think that [Taiwan is] hoping—not just [the Ministry of Defense], but the government in general—is hoping for voices of support from the United States, but also perhaps from Europe and elsewhere to make the accurate observation of the threat posed by China in conducting such behavior,” he added.

“It’s notable that when North Korea fires missiles over Japan, it’s not just Japan that protests. It’s South Korea, the United States, Europe, the U.N., etc.,” Cheng said. “Will there be any outcry? And I think that that is something that they are going to hope for.”

House Speaker Nancy Pelosi, D-Calif., traveled with a congressional delegation to Taiwan earlier this week during a tour of Asia despite threatening rhetoric from the Chinese Communist Party and hesitancy from the Biden administration.

“In the face of the Chinese Communist Party’s … accelerating aggression, our congressional delegation’s visit should be seen as an unequivocal statement that America stands with Taiwan, our democratic partner, as it defends itself and its freedom,” Pelosi wrote in an op-ed commentary published Tuesday by The Washington Post.