UK Cracks Down While US Doubles Down on ‘Gender Affirming’ Care 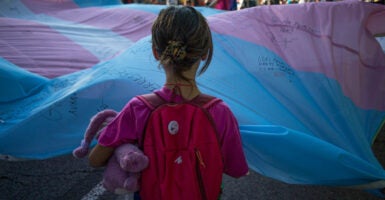 A girl holds the transgender pride flag during the pride march held in the streets of Madrid. Thousands of people participated in the Madrid Pride Parade. (Photo: Luis Soto/SOPA Images/LightRocket/Getty Images)

American lawmakers need to follow the lead of another country and put the brakes on “gender affirming” procedures for children.

Health officials in the United Kingdom are acknowledging the damage being done by pushing puberty blockers and cross-sex hormones onto children at exactly the same time as the Biden administration is demanding that education and health professionals endorse these “affirmative” treatments or face penalties.

The contrast between the direction of gender-related policies in the United States and the U.K. could not be starker. The U.K. is shuttering its sole “gender clinic,” Tavistock, following a comprehensive review, while the U.S. is opening scores of new gender clinics, following the refusal of the American Academy of Pediatrics to conduct a review of the evidence.

The U.K., along with other European countries, started widespread use of puberty blockers and cross-sex hormones for children identifying as transgender almost a decade before clinics opened in the U.S. for the same purpose.

With that extra decade of experience, European health officials have accumulated more evidence of the long-term damage being done and have started to reverse course.

The U.K. review led by Dr. Hilary Cass, the former president of the Royal College of Paediatrics and Child Health, noted that gender clinic “staff have told us that they feel under pressure to adopt an unquestioning affirmative approach … ” in which children’s claims about gender dysphoria are not carefully examined and underlying mental health issues are not properly addressed before prescribing puberty blockers and cross-sex hormones.

The review also expressed concern about the gross over-representation of girls and children on the autism spectrum being recommended for puberty blockers and cross-sex hormones. If the rise in prescribing these drugs were simply a matter of children feeling freer to express their true selves, rather than the result of social contagion and recruitment among vulnerable groups, then those treated would better reflect the broader population.

It is increasingly clear that we are witnessing a dangerous craze among children with mental health challenges rather than the liberation of the sexually oppressed.

When these kinds of dangerous crazes manifested themselves in the past in the form of eating disorders or cutting, responsible adults and health officials recognized the problem and coordinated their responses to address the underlying depression, anxiety, and other mental health issues.

No one thought to “affirm” these children for expressing their true malnourished or scarred selves. But that is precisely what school and health officials in the U.S. are doing right now as they mistreat children with gender dysphoria.

The pressure to “affirm” expressions of gender identity and prescribe drugs rather than address underlying mental health issues is resulting in a dramatic increase in youth suicide in the U.S.

I was able to examine a natural policy experiment that resulted from some states having an extra barrier to children accessing puberty blockers and cross-sex hormones by requiring parental consent while other states allowed exceptions.

The U.S. needs to follow the example being set by the U.K. and other European countries by reversing the rush to put large numbers of girls and children with autism on puberty blockers and cross-sex hormones.

If the Biden administration is determined to step on the accelerator, governors and state legislatures can pump the brakes by raising minimum ages for who can receive these treatments and imposing stricter liability on practitioners who place children’s life, health, and fertility at risk.

State policymakers and school officials can also pump the brakes on “social transition” in which children change their names and pronouns, which is often the gateway to the “medical transition” of puberty blockers, cross-sex hormones, and eventually surgeries.

State laws should ban schools from using names or pronouns for children that differ from those listed on their birth records without the written permission of the parents. Such a ban would prevent school staff from facilitating social transition in secret from parents and without their consent.

We need all of the responsible adults—parents, school staff, doctors, and policymakers—working together to recognize and address the underlying mental health issues children are experiencing.

When education and health professionals rush children onto life-altering medication, and either deceive or coerce parents to get on board, we see the kinds of disasters that forced the U.K. to shutter its national gender clinic.

Let’s hope the U.S. can learn this lesson without having to produce another decade of damage.