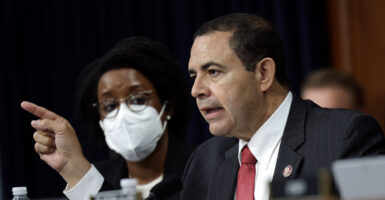 Rep. Henry Cuellar, D-Texas, has given up on having conversations with the White House about the border because top officials in the Biden administration are only interested in listening to “immigration activists,” he said in an exclusive interview.

Cuellar, who represents a South Texas border district, has long supported securing the border and was in favor of keeping Title 42, a public health measure to quickly expel illegal aliens, in place, despite the Biden administration’s attempt to end it. He’s also a pro-life Democrat and was the only member of his party to vote against an abortion bill in 2021.

He was recently one of five Democrats to vote against an assault weapons ban. In the current congressional term, Cuellar has voted against the majority of House Democrats 4.1%, according to ProPublica.

The Texas Democrat has suggested that the White House not just limit its conversations about the border to the activists, saying it should include border communities and border authorities, like Immigration and Customs Enforcement and Border Patrol, he explained.

“I’ve always said, when you look at border issues, you gotta look at three factors. Yes, immigration activists. Second of all, they’ve got to listen to these border communities, which they’re not listening to border communities, and that’s one of the things that I pushed very hard,” Cuellar said.

“The other thing is, they have to also listen to the men and women in green and blue and ICE. They need to do that. So I think what’s happening is that they don’t want to upset the immigration activists and I know that because I had somebody tell me that one time, but I think that’s wrong,” he said.

“I think he gets it. But, in my personal opinion,  there are some forces from the White House that think otherwise,” Cuellar said.

Authorities have encountered 1,746,119 migrants at the southern border since October, surpassing the previous fiscal year’s total and breaking monthly records.

Neither the White House nor the Department of Homeland Security responded to The Daily Caller News Foundation’s request for comment.